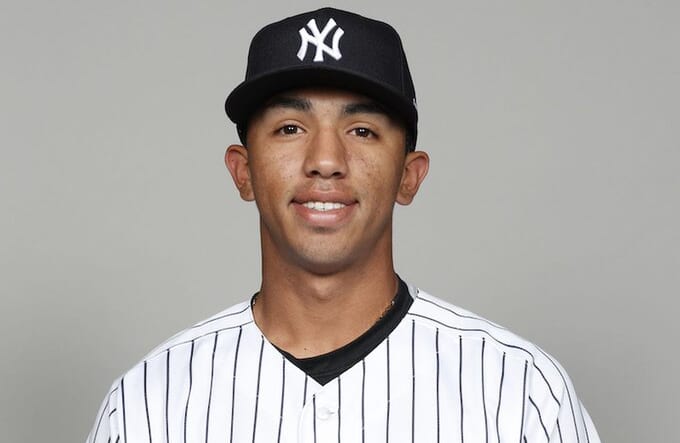 With Isiah Kiner-Falefa, Josh Donaldson, and Gleyber Torres all heavily disappointing the Yankees this season at the dish, the Yankees turn to one of their best prospects Oswald Peraza.

A 22 year old signed out of Venezuela, he’s one of the premier shortstop prospects in the league, ranking as the #53 prospect according to MLB Pipeline and the #33 prospect on FanGraphs THE BOARD ranking. He’s been talked about for weeks as a potential call up option, and he cranked his 19th HR of the season before being pulled from the game and promptly sent to St Petersburg to help the Yankees take on the red-hot Tampa Bay Rays

Getting to Know Oswald Peraza

Heralded for his slick defensive play at the shortstop position, he’s made a myriad of highlight plays at the position.

The Yankees are looking for defensive stability out of the SS position as Isiah Kiner-Falefa made another brutal error with Gerrit Cole on the mound, and Peraza can provide that. With just 9 errors this season across 744.2 innings, he’d be in the top 10 in terms of error prevention. We’ll have to wait and see how he truly is defensively at the MLB level as errors are not a great way to evaluate defensive value. His athleticism should boast well for handling tough plays, and hopefully it gives the Yankees the defensive stability they need.

His bat is something that gets overlooked because he wasn’t anticipated to hit much when originally signed, but he turned on the jets when June rolled around. With 14 HRs in 61 games and a wRC+ near 130, Peraza has some serious power that gets underrated.

He pulls a ton of flyballs, and with an ISO near .200 he’s someone who could definitely crack 20 HRs at the MLB level over a full season. He isn’t someone you should expect to post strong OBP numbers as he walked just 8.0% of the time at AAA, but he could definitely post an OBP around .310-.320 with an SLG north of .400.

Lastly, his baserunning is absolutely superb. He’s swiped 33 bags in 38 attempts, a success rate at ~87%. He’s blazing fast and extremely aggressive as a baserunner, and it’s led to a ton of great results in that regard. His baserunning and defensive value give him a high floor, while his bat is the variable that will separate him from a 2 WAR player and make him a ~4 WAR player.

Should Isiah Kiner-Falefa See the Bench?

It’s unfair to claim all of the Yankees struggles in August are because of IKF, but he is one of the catalysts for their struggles. With the 2nd worst qualified fWAR among shortstops and a mere 80 wRC+, he just can’t cut it as a full-time starter at SS. I think he gets a bad rep defensively when he’s a better than average defender (DRS and UZR both like him), but having the 11th worst Offensive Runs in the league is unacceptable. He’s a defensive wizard at 2B and 3B (he won a gold glove there!), and his baserunning is still extremely valuable. If Peraza is to struggle, Kiner-Falefa should reclaim the job, but for now I could see IKF as the Yankees’ UTL guy in the infield.

Don’t think Torres and Donaldson are off the hook either, I expect Cabrera and Peraza force those three to have to elevate their game or else they’ll find themselves as spectators down the stretch and in October. They weren’t afraid to do this to Gary Sanchez, so don’t expect them to put on kiddy gloves for struggling vets on the team at this stage of the game.

Oswald Peraza Gives the Yankees a Much Needed Wake Up Call

Steamer projects Oswald Peraza to post a 97 wRC+ (2.6 fWAR/600), and that’s an upgrade over IKF’s 80 wRC+ right now. He’s a dynamic baserunner and provides that youthful spark that you hope can wake up the other guys in the locker room. He isn’t the savior; he’s a 22 year old rookie trying to help energize a team that’s played asleep for a month. He’s part of the upcoming youth movement that looks to make a splash on the Yankees in 2022 and 2023. Anthony Volpe and Austin Wells don’t seem too far behind, and Jasson Dominguez and Spencer Jones hope to follow suit. For the first time, the Yankees are finally seeing their top guys from their recent prospect classes get their shot at the MLB level, and it’s beyond exciting.

Oswald Peraza may struggle for a little, he may look like a rookie, but that’s because he is a rookie. Don’t call him a bust in his first week up, just let things play out and see if he’s got what it takes to make an impact right now. He’s currently the youngest player on the roster, but he knows he now has a chance to establish himself as the shortstop of the future; even with Anthony Volpe looming.