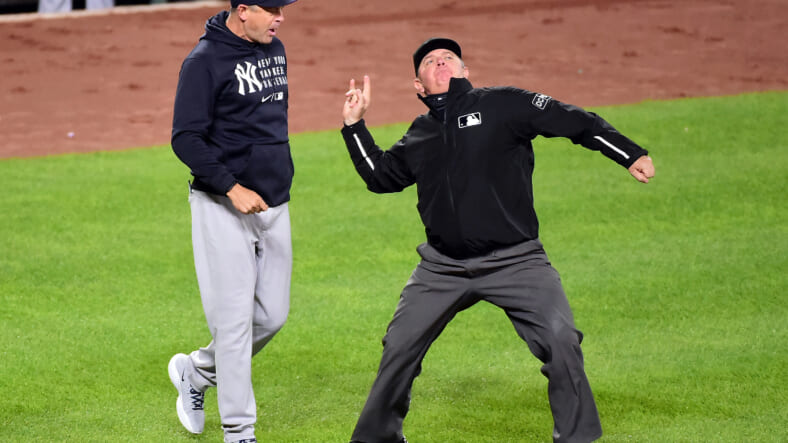 The New York Yankees were swept in the ALCS by the Houston Astros, an unexpected turn of events that has sent the organization into a whirlwind. The team has yet to extend general manager Brian Cashman with his contract expiring, and superstar slugger Aaron Judge could be on his way out with rumors indicating the San Francisco Giants are ready to make a big play for his services.

The Yankees could have themselves an entirely different team during the 2023 season, losing their best player and witnessing massive turnover within their ranks. However, it is more than likely most things remain the same, despite reports indicating that the players experienced a “brutal” playoff series in the Bronx.

Per Andy Martino of SNY:

“More than one Yankee player has told his agent this week that playing at the Stadium last weekend was an usually brutal experience. It was hard for many teammates to believe that fans booed Judge.”

For any fan that decided booing Judge was a good idea, you may want to look at his statistics one more time. Without him, the Yankees might’ve missed the playoffs entirely, let alone reach the ALCS and once again put themselves in the conversation for a World Series appearance. Criticism for poor performance is certainly warranted, but booing a player that had a historic season is nonsensical.

Players clearly felt a certain way about the negative attention, with Andy Martino suggesting that some don’t want to remain Yankees anymore.

“Now the clubhouse itself feels crushed under the weight of that brand. More than I’ve ever seen, players don’t want to be Yankees. The team needs to find a way to change the message and tone — though after all these years, doing so might be near impossible.”

The Yankees need to redefine their culture:

Considering Brian Hoch of MLB Networks suggested that Gleyber Torres may want to take his talents elsewhere after being floated in trade rumors at the deadline this past season, it is possible that the Bombers are simply falling out of favor as a destination.

The hostility fans bring to the stadium is simply unwarranted and a cause for concern. Fans of already run multiple players out of town, including Joey Gallo and Isiah Kiner-Falefa, might be next on the list.

From the perspective of a player, why put yourself in a situation where you could be harassed at a level that forces you to stay inside your tiny New York City apartment?

Aside from the multitude of decisions Hal Steinbrenner hast to make this off-season, the Yankees simply need a culture shift among their ranks and among their fans.

From a fan perspective, a World Series would cure all of these problems, but the team has come up short routinely over the past decade, which is starting to get on the nerves of many. At the end of the day, someone needs to be held responsible for falling short year after year.