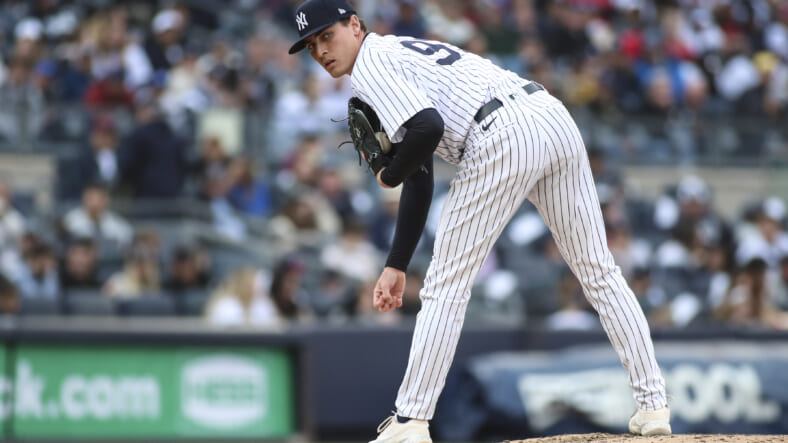 The New York Yankees can’t afford to be losing any more bullpen arms, especially with Clay Holmes and Wandy Peralta already on the injured list with individual issues. However, the Bombers removed rookie relief pitcher Ron Marinaccio from Sunday’s game against the Baltimore Orioles after pitching just an inning.

There was immediate concern regarding Marinaccio‘s health, but the team reported that he was dealing with a shin issue that has been bothering him since July. That makes it quite odd the Yankees wouldn’t give him rest ahead of the playoffs, trotting him out there to potentially aggravate the injury.

Unfortunately, that is exactly what happened, as the team placed the 27-year-old on the injured list, all but ruling him out for the ALDS.

The Yankees lost a great bullpen arm in Ron Marinaccio:

Marinaccio has been fantastic for the Yankees this season as a rookie, hosting a 2.05 ERA, 11.45 strikeouts per nine, an 81.3% left on-base rate, and a 41.5% ground ball rate over 44 innings. His 0.41 home runs per nine is one of the best metrics in the bullpen, and he features arguably the best change-up on the entire team. In fact, his change-up produces 7% more vertical movement than the average pitcher and 18% more horizontal break. Even his 4-seam fastball is elite, featuring a 45% better horizontal break.

The momentum Ron has curated over the past few weeks is something the Yankees will miss considerably during the postseason. He hasn’t given up an earned run since September 20 and has only given up three earned runs in his last 11.1 innings.

In his absence, the Yankees will likely rely on Greg Weissert and newly elevated pitcher Matt Krook to help mitigate fatigue down the stretch.

However, bullpen arms continue to drop like flies, and Aroldis Chapman continues to increase his odds of making a postseason appearance, which the Yankees would prefer to avoid at all costs given his polarizing season up to this point.