Yankees’ offense explodes after getting key offensive piece back 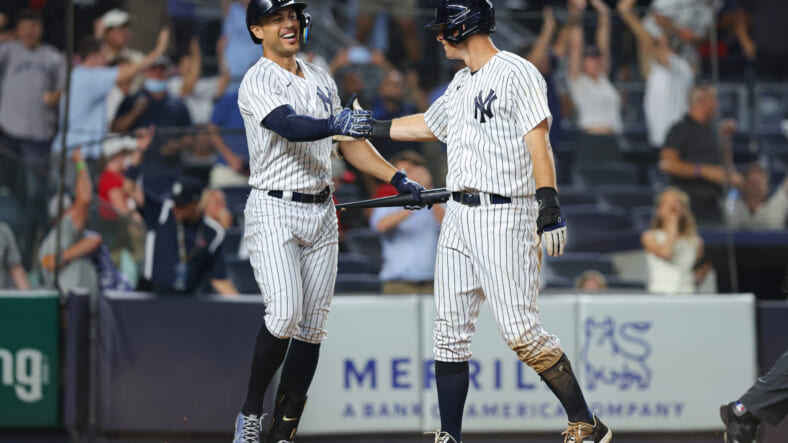 The New York Yankees‘ offense has struggled ever since the All-Star break, but they exploded with 13 runs against the Oakland Athletics on Thursday night. Coincidentally, this was also Giancarlo Stanton’s first game back from a lengthy spell on the injured list, dealing with Achilles tendinitis.

Stanton last played on July 23 against the Baltimore Orioles, enjoying just one at-bat before being pulled. However, in his first game back following the injury, he recorded three RBIs, including a two-run single, and walked in a run with the bases loaded. He currently hosts a .229 average on the season with a 31% on base rate and a .495 slugging percentage.

It was clear the Yankees desperately needed their cleanup hitter back, having spent the last weeks with Josh Donaldson featuring in that role.

Despite Stanton’s return, the bottom of the Yankees’ batting order on Thursday was ferocious. The last five batters collected 12 hits in total, including 12 runs, providing plenty of insurance for starting pitcher Jameson Taillon, who put together a solid start, allowing one earned run over 6.0 innings.

However, the return of Stanton is a significant development for the Bombers, who have missed his game-changing presence in the lineup.

Manager Aaron Boone will likely mitigate his usage on the defensive side, given the nature of his injury. Achilles tendinitis can be a stubborn issue, meaning we shouldn’t expect to see Stanton playing in right field very often.

Come the playoffs, the designated hitter spot will be an interesting decision since the team also projected to get Matt Carpenter back. At some point, Stanton will have to feature in right field, especially if they want to get Carpenter’s lethal bat back into the mix. Before suffering a fractured foot, Carpenter was hitting .305 with a 41% on-base rate, 15 homers, and 37 RBIs.

Unless the Yanks want to take a more risky approach and utilize Carpenter as a defensive player, which is unlikely, Boone will have to get Giancarlo active in the field.

Nonetheless, his offensive spark will help the team down the stretch considerably. Looking at his advanced analytics, Stanton features a 128 wRC+, meaning he’s 28% better than the average MLB player. He features a 53.7% hard-hit rate, 20.7% barrel rate, and 95.3 mph of exit velocity, the highest in his career.

One of Stanton’s most lethal attributes is his production with runners in scoring position. Stanton hosts a .286 average with a 37% on base rate and a .623 slugging percentage with RISP. He’s hit eight homers with 42 RBIs over 77 at-bats.

The Yankees have missed his production in that category specifically. He put his value on display against Oakland in just the first game back. He will have to continue building momentum during the remainder of the regular season, hoping to get hot going into the playoffs.