Yankees News: One bullpen arm who needs to step up big for the rest of the 2022 season 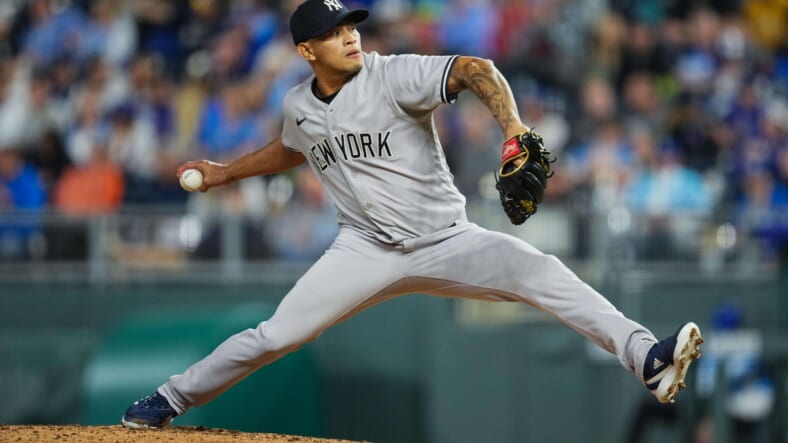 The New York Yankees bullpen has been rather consistent this season despite dealing with adversity the past month or so. Injuries and fatigue have begun to arise, specifically regarding Ron Marinaccio, Jonathan Loáisiga, Aroldis Chapman, and Miguel Castro, who was placed on the injured list just before the All-Star break.

However, Loáisiga has finally returned from a shoulder injury he suffered earlier in the season. Over the first two months of the 2022 campaign, he struggled considerably, posting a 6.00 ERA in April and 8.22 ERA in May. So far in July, he’s given up six hits and three earned runs in just 1.2 innings of action, settling with a 7.85 ERA, the worst on the team with his sample size.

This isn’t the same Loáisiga the Yankees are used to:

However, we’ve seen a different version of the Loáisiga in the past, notably during the 2021 season. Over 70.2 innings, he recorded a 2.17 ERA, 8.79 strikeouts per nine, and 0.38 home runs per nine rate. His 79.1% left on base rate and 60.9% ground ball rate were phenomenal, helping him land some of the best numbers of his career.

With his quality degrading this season, the Yankees desperately need him to find his previous form. Having the best version of Loáisiga during the postseason would give them the bullpen support they need to win games, Loáisiga features a sinker, curveball, and change-up as his primary weapons.

Focusing on some of his more prominent pitches. He throws his sinker 60.4% of the time, which is a Matt Blake special. He has completely eradicated his 4-seam fastball the past two seasons, replacing it with his sinker, which he’s throwing at 97.6 mph.

Batters are crushing his sinker:

Blake had been pushing Loáisiga to utilize his sinker prominently to try and increase its efficiency. It simply isn’t generating the same production as others in the bullpen. The problem is that Loáisiga needs to feature a fastball of some sort. His sinker is historically better than his 4-seam.

With that being the case, Loáisiga could utilize his curveball and change-up more moving forward, his two best pitches by a large margin. If he can increase the efficiency of his sinker, Loáisiga will become a reliable option from the bullpen, but for now, he is still fighting to get back to his usual self.