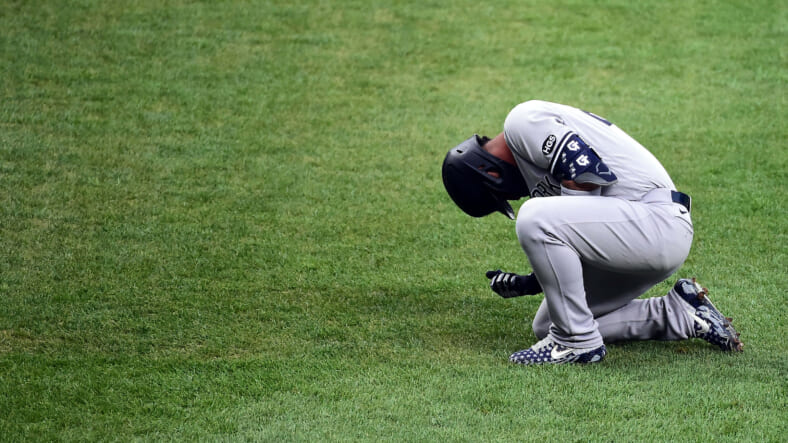 The New York Yankees currently have 15 players on the injured list, with starting infielders Gio Urshela and Gleyber Torres joining them this week. With the majority of their ailing players being pitchers, losing position players is never an ideal reality.

Both Urshela and Torres could miss upwards of a week, as Gio is nursing a hamstring injury, and Gleyber picked up a thumb strain sliding into second-base over the weekend.

Unfortunately, the Yankees’ starting third baseman suffered a setback, which will force him to wait another week at least until a potential return.

â€œHe felt a little something toward the end of his groundballs. Heâ€™s back in New York. I donâ€™t anticipate him being with us this week,â€ Boone said.

Clearly, the team is being extra careful with Gio, as they’ve injected Tyler Wade and Rougden Odor at the hot-corner to supplement his loss.
As for Torres, the team doesn’t expect him back for at least another 10-20 days, which Boone regarded as a positive development.

â€œHeâ€™s feeling better,â€™â€™ Boone said. â€œWe were kind of expecting the worst and probably got some pretty good news.â€

Losing two starting infielders who play significant offensive roles is never ideal, but the Yankees have luckily managed to squeak out wins in the meantime. A series against the Kansas City Royals certainly gives them a bit of cushion.

However, Kansas City gave New York a run for their money on Monday evening, carrying the game to 11 innings with four lead changes. The bullpen struggled to maintain leads during the bottom portion of the game, giving up five runs after Jameson Taillon blanked the Royals over 6.0 innings.

The Yankees’ bullpen has been solid this year, so an anomaly every now and then is understandable. At the end of the day, walking out with a win is all that matters.