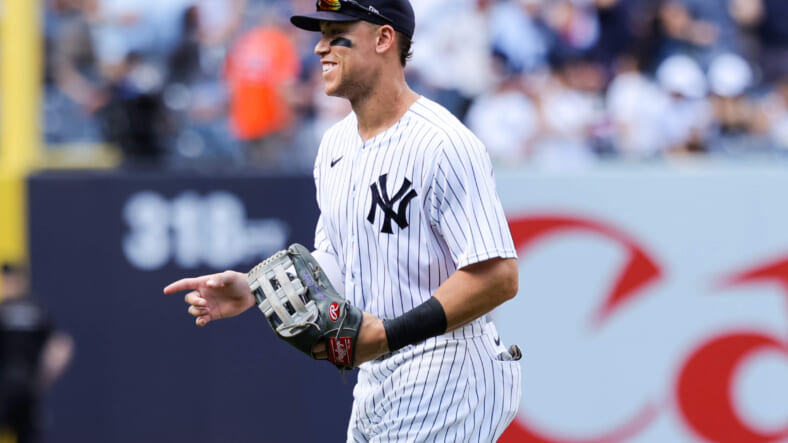 The New York Yankees are currently battling with Aaron Judge in arbitration to settle on his salary for the 2022 season. General manager Brian Cashman is hoping to settle at $17 million, which would provide the Yankees with about $4 million extra at the trade deadline to acquire reinforcements.

Judge is looking for $21 million, which would cut the Yankees’ ability to make moves at the deadline, putting them even closer to the $270 million luxury tax threshold, which would balloon their tax rate if crossed.

However, coming off a walk-off single against the Houston Astros on Thursday night, Judge has all the leverage, despite his salary this season based on 2021 metrics. The reality is that Judge has put the Yankees in a tough financial spot, but he’s earned every dollar.

“We always hope the best for our guys in arbitration and stuff like that,” Hicks said. “We want him here as a Yankee.”

Another Aaron came up big on Thursday night, Aaron Hicks. The struggling outfielder belted a three-run homer in the bottom of the 9th inning to draw the game at 6-6. That blast put Judge in a position to walk it off with Jose Treviño on second base.

The Yankees are all business and it’s resulting in wins:

“There’s a sign on the way out to the dugout that says, ‘Do Your Job,'” Judge said. “That’s what I tried to do in that situation.”

The game had a playoff feel, especially since the Yankees and Astros have connected several times during the postseason the past few years.

“This was a playoff atmosphere right there,” Judge said.

“That’s when this game’s at its best right there, moments like that,” he added. “Crowd’s on their feet, game’s on the line. They’re the moments in your backyard you dream about.”

Unfortunately for the Yankees, it was just a regular-season game that propelled them to their 52nd win of the season.

The Bombers will face off against Houston once again on Friday night with Luis Severino and Justin Verlander on the mound.

Verlander is having an incredible resurgent season after dealing with injury in 2020-21. He has a 2.30 ERA over 82.1 innings. His strikeout rate is down considerably compared to his past few seasons of healthy play, and batters are making more contact, which suggests the Yankees can take advantage of the 39-year-old veteran.