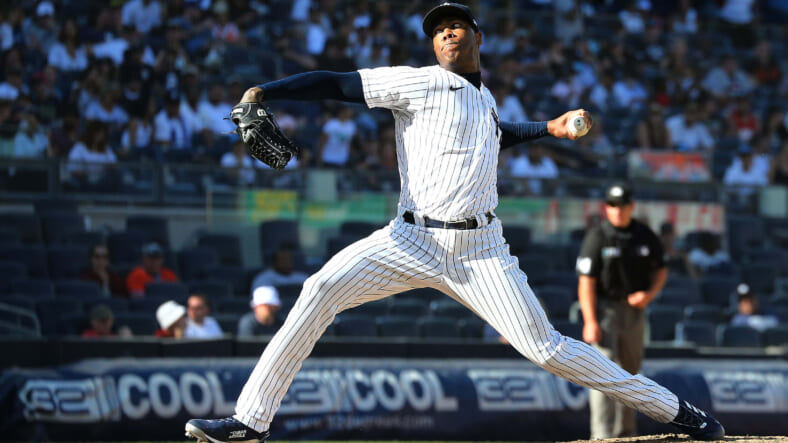 The New York Yankees failed to overcome the Baltimore Orioles on Saturday in a game they desperately needed to win, with Tampa Bay continuing to advance in the AL East.

Tampa blasted the Minnesota Twins 11-4 on Saturday, giving them a healthy 7.5 game lead over the Yankees. In the Wild Card, the Bombers have given up a ton of ground, sitting at 0.5 games above Boston and four games above the Seattle Mariners and Oakland Athletics. With the season quickly winding down to an end, the Yankees must walk away with wins against bad teams like Baltimore, which shows a serious kink get their armor.

However, the Bombers entered the ninth-inning tied 3-3 after Joey Gallo smashed a two-run homer in the eighth inning. Unfortunately, closer Aroldis Chapman blew another save, giving up one hit and one run over an inning. His ERA has elevated 3.72 on the season after starting off the year in phenomenal form. He has come crumbling down, and while skipper Aaron Boone is trying his best to remain positive, it was clear that the loss to Baltimore was frustrating.

“These games are super important and we’re trying to win them,” Boone said. “We got held down enough today, so that’s frustrating and unfortunate, but we have a big one tomorrow we have to grab.”

Chapman was able to corral the inconsistencies for a bit, but eventually, he allowed Pedro Severino to lash a sacrifice fly to left fielding driving in Ryan Mountcastle.

“When it started to get a little wobbly there, I felt like he was able to corral it,” Boone said. “And I think that’s important moving forward.”

Boone is grasping at straws here, as one of the best closers in the history of the game should be able to finish off poor teams like the Orioles routinely. However, ever since the MLB crackdown on substances to increase speed rate and velocity, Chapman has seen his numbers and efficiency plummet.

The Yankees have one more game against Baltimore on Sunday afternoon with Corey Kluber on the mound, giving them a solid opportunity to bounce back. Baltimore will have Keegan Akin featuring, and with a 6.90 ERA this season, the Yankees have a solid advantage.