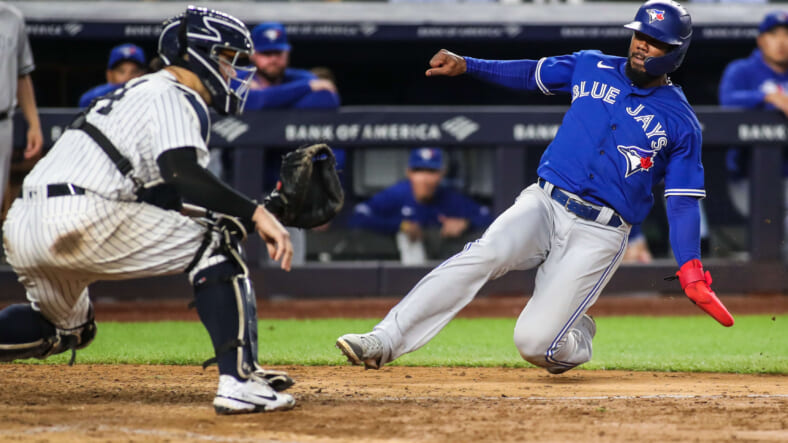 The New York Yankees are currently on a six-game losing streak, falling to the New York Mets on Friday evening by a score of 3-10. Giving up double-digit runs to the Mets only confirms that the Yankees have hit rock bottom, and they will be looking to change their momentum on Saturday evening with Corey Kluber on the mound.

However, it could be too little too late, as the Yankees are only 0.5 games ahead of the Toronto Blue Jays in the Wild Card standings. Thankfully, Baltimore managed to take down Toronto on Friday, giving the Bombers a bit more life. The Boston Red Sox are only one game ahead of the Yankees in the WC, and with 21 games remaining in the regular season, itâ€™s survival of the fittest moving forward.

However, the Yankees struggled considerably to get going against their crosstown rivals, and catcher Gary Sanchez had one unfortunate slip up during the game that aided the Mets’ offensive masterclass.

With Jonathan Villar sliding into home plate, Sanchez elevated his body too much, allowing him to sneak his feet in and cross safely. This allowed the Mets to tie the game in the first inning, which started a series of unfortunate events.

Gary Sanchez misses the tag on Jonathan Villar and the Mets tie this game at 1-1 pic.twitter.com/YSDPyIaW8K

â€œObviously, heâ€™s going to be out easy,â€ Boone said. â€œItâ€™s a great throw by Joey and I think (Sanchez) felt like (Villar), because he was so out, would pull up. Well, he got out of his crouch and athletic position. In that spot where youâ€™ve got a guy dead to rights, youâ€™ve got to just lower your body, maybe initiate the contact, but remain athletic in your legs.

Boone says it perfectly, the play shouldâ€™ve resulted in an easy out, but Sanchez made the play far more difficult for himself. By staying low and going for his legs, Sanchez wouldâ€™ve easily helped his team get out of the ending without incurring any damage.

â€œItâ€™s a big play,â€ Boone said. â€œItâ€™s an important play, but youâ€™ve got to deal with that over the course of a season.â€

This is the type of play the Yankees cannot continue to make if they want to be a postseason caliber team. Going on lengthy cold streaks significantly hurts their probability of reaching the playoffs, and at this point, unless they embark on a strong winning streak to finish the year, they will almost 100% be watching from their couches in a few weeks.