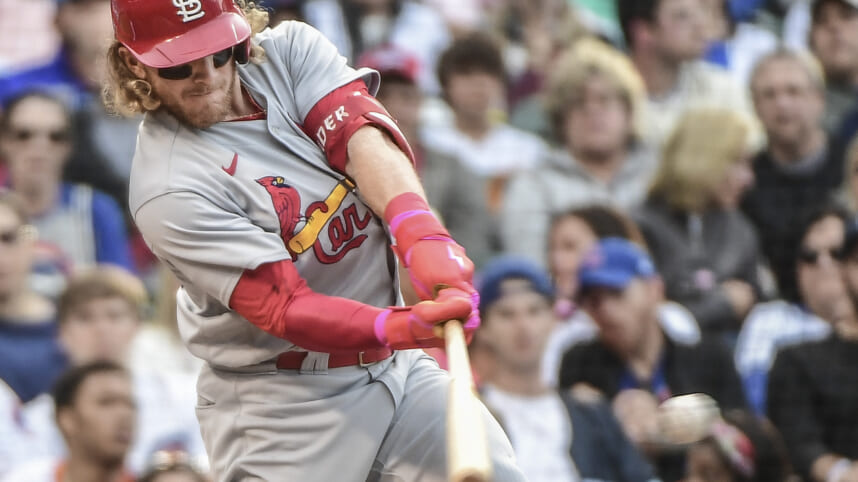 The New York Yankees desperately need some new blood in the batting order and on the defensive side, especially after a tough West Coast road trip.

The team has one game left against the Los Angeles Angels before traveling to Tampa Bay and then taking on the Minnesota Twins at home, but they are nearing a point in the season where they expect to get multiple players back — likely in mid-September.

The Yankees are gearing up for the return of Harrison Bader:

Luckily, they received some great news on trade deadline acquisition Harrison Bader and his ramp-up. Manager Aaron Boone stated before Tuesday’s game against the Angels that Bader has been increasing his activity and will be taking part in rehab games within the next 10 days or so. Specifically, he stated that ”he’s probably in a 10 day ramp up” before commencing rehab games.

The Yankees could use Bader in centerfield, who will feature premium-level defense, likely shifting Aaron Judge back to right field. It will be interesting to see how Boone utilizes Oswaldo Cabrera, considering he’s been serving as the everyday right fielder with Aaron Hicks riding the bench.

However, Boone decided to sit Gleyber Torres on Tuesday due to his offensive struggles, so it is possible that Cabrera slides in right at second base, providing elite defense and a bit more spark on both sides of the ball.

Bader is capable of impacting the game in many different ways, containing star attributes. He’s capable of hitting double-digit homers, tallying 16 in 2021 with a .460 slugging percentage. Those numbers have deteriorated this season, hitting just five homers with 21 RBIs over 72 games.

However, he does feature a .256 average with a 30.3% on base rate and. 370 slugging percentage. Having stolen 15 bases, though, Bader is capable of turning a single into a double in the blink of an eye with his blazing speed. He does host a career-low 4.9% walk rate but also a 17.8% strikeout rate (personal best).

One thing to like about Bader is his ability to make contact with runners in scoring position. This season over 62 plate appearances, he’s hitting .250 with a 30.6% on-base rate, two homers, and 15 RBIs.

His most valuable metric is the +15 defensive runs saved above average from the 2021 season. Bader has arguably the best range in centerfield of any defensemen in baseball.

That variable could end up becoming extremely valuable during the playoffs, which is why the Yankees acquired him, to begin with. If he’s gearing up to start rehab games in 10 days, we could see him make a return within the next 2.5 weeks.