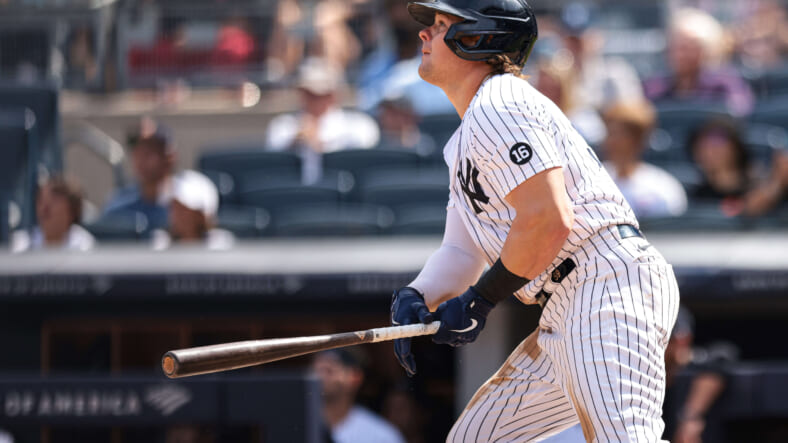 The New York Yankees are focused on finding a solution at the shortstop position, but they also have an opening at first base. After trading for Anthony Rizzo from the Chicago Cubs at the deadline this past season, they have a decision to make — extend Rizzon on a multi-year deal or look for a supplement.

However, Luke Voit might have a thing or two to say regarding the Yankees overlooking him as a long-term option at the position. Voit has been a consistent slugger for the Bombers, but his defensive deficiencies and injury history has prevented them from committing to him as their regular first baseman.

In fact, the Yankees were speaking with a National League team, the Milwaukee Brewers, about a potential deal that would send Voit out West before the lockout was instituted. The Brewers might’ve been intrigued by Cashman’s desire for an outfielder, which could’ve resulted in a salary dump for Lorenzo Cain, Joel Sherman of the NY Post suggested.

Given Cashman’s interest in trading Voit, it suggests they have a plan in place to upgrade the 1B spot with a quality player, whether that be via free agency or a trade. Of course, Rizzo makes the most sense given the team’s confidence in him, but I wouldn’t rule out the potential for a blockbuster deal including Freddie Freeman or a trade for Matt Olson.

Freeman is coming off a World Series victory with Atlanta, but if they’re unwilling to reach his six-year contract desire, the Yankees could swoop in and surprise everybody with a behemoth offer. Olson, who would cost a lot less financially but command significant prospect allocations, could also be on the table. Cashman spoke to Oakland about their needs in a prospective trade, but things never materialized ahead of the lockout.

Ultimately, it boils down to how much Cashman is willing to spend, considering he still needs a shortstop, depth outfielder, and starting pitcher to pair with Gerrit Cole. Owner Hal Steinbrenner is confident the lockout with turn in favor of the owners, which will help his team financially, despite spending a small amount of the revenue he brings in every season.

Back in 2018, it was reported that the Yankees brought in $668 million in revenue but used only 30% toward player salaries. That number has only dropped over the past three seasons, indicating even more separation between fair and ownership greed. If the Steinbrenner’s decided to spend a healthy amount, they could push past the luxury tax threshold and sign Freeman, Carlos Correa, and a pitcher like Carlos Rodon. However, his inexcusable conservatism is a problem, something the Players Union is fighting tooth and nail to change.