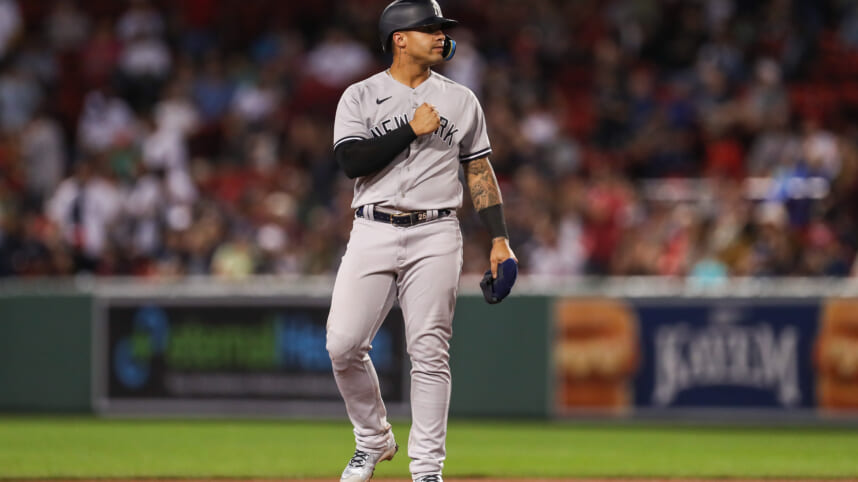 The New York Yankees floated the idea of trading infielder Gleyber Torres at the trade deadline in early August. Torres went on to have an abysmal month after hearing the news but bounced back nicely in September before the season winded to an end.

However, Torres has taken a few steps in the right direction, notably on the defensive side. The 25-year-old earned a .985 fielding percentage over 1082.2 innings at second base for the Yankees this past season. He tallied seven errors with 47 double plays, nine defensive runs saved above average, and break-even outs above average.

With youth talent climbing the system like Oswald Peraza, Oswaldo Cabrera, and the expected elevation of Anthony Volpe, the Yankees may not have a need for Torres moving forward, making him expendable. With the Seattle Mariners trading for Teoscar Hernandez from the Toronto Blue Jays on Wednesday morning, they could look to bolster their infield with Torres, a now above-average defender with quality hitting tools.

The Bombers managed to acquire a few prospects and MLB-ready relief pitcher Matthew Festa in this mock trade. Festa pitched 54 innings for the Mariners last season, earning a 4.17 ERA, 10.67 strikeouts per nine, and a 75.5% left on-base rate.

At 29 years old, Festa has the pitch repertoire to be a quality arm. He utilizes a slider/4-seam fastball combination. His fastball generated a .179 average last season at 92.6 mph on average, throwing it 43.3% of the time. He tossed his slider at 56.5%, producing a .248 average with 39 strikeouts.

Festa’s slider produces 64% more horizontal movement than the average pitcher, giving it that sweeping motion that Matt Blake prefers in the bullpen. The Yankees may be able to extrapolate on his talents coming off a spotty 2022 campaign.

The Yankees also acquire switch-hitting outfielder Jonathan Clase, Seattle’s No. 13 prospect. In A-ball this past season, he hit .267 with a 37.3% on-base rate, a 13% walk rate, and a 26.7% strikeout rate. He smacked 13 homers with 49 RBIs and 55 stolen bases. Clase is an athletic prospect with upside, but still has a few years left in the minor-league system before he can make an impact at the big-league level.

Berroa featured in High-A ball and Double-A last season in Seattle’s farm system. He posted a combined 2.86 ERA over 26 games, pitching 100.2 innings in total. As an expected starter, he generated 150 strikeouts, a solid number that showcases his quality. He’s considered a big strikeout arm with command issues, but the Yankees may be able to extrapolate on that weakness and try to alleviate it moving forward.

Getting some decent value for Torres is a necessity, given he is 25 years old and has two years left of control before hitting free agency. Torres hit .257 with a 31% on-base rate this past season, including 24 homers and 76 RBIs. His 6.8% walk rate was the lowest in his career, logging a 22.6% strikeout rate.

Torres returned to his aggressive style, which he showed during the 2018-2019 seasons. He smacked 24 homers this past campaign with 76 RBIs, earning a career-high 44.9% hard-hit rate and 10.7% barrel rate.

With solid slugging metrics and good defense, Torres has plenty of value to contribute toward a playoff-caliber team. Seattle seems to be making a legitimate run at a postseason appearance next year, and Torres could easily fit into the equation, given their needs in the infield.