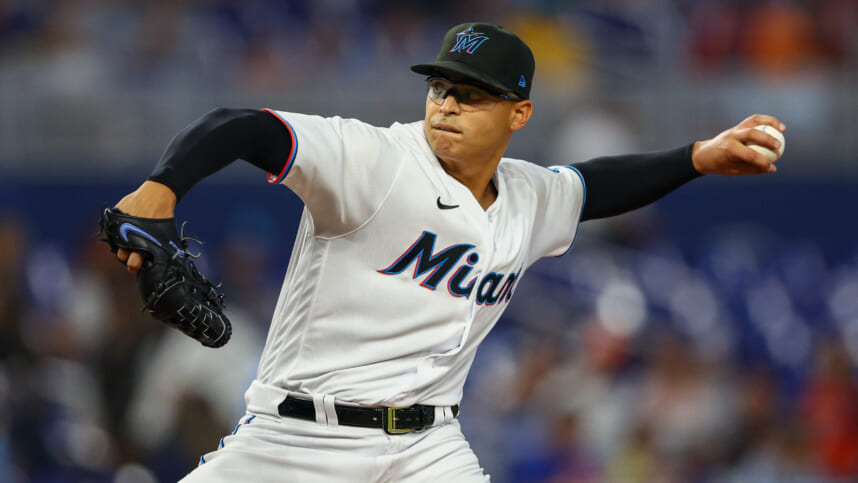 The offseason for the Yankees has kicked into another gear with all sorts of hypotheticals and rumors running rampant. One guy I haven’t seen a lot of chatter surrounding, and I suppose for obvious reasons, is Jesus Luzardo.

Luzardo is a phenomenal pitcher and is one the most intriguing in baseball today. While the Marlins haven’t exactly shopped Luzardo, I don’t know if they’d say no to any offer that is good enough for anyone on the roster. I don’t see Miami being in a competitive spot next season, especially with how competitive the NL East is alone. Luzardo to the Yankees would be an all-time move by the front office & he would immediately slot into the rotation.

Why the Marlins could be looking to sell:

For starters, let’s look at why the Marlins would be willing to dump Luzardo. The Marlins seem to constantly be in a perpetual state of “we have the pieces, BUT we aren’t there yet,” and I don’t know how much longer that can sustain.

With a front office overhaul, I feel like some current pieces may be shipped off to begin anew. The marlins also recently DFAd numerous key prospects, like Lewin Diaz and Jose Devers — who sadly couldn’t recover from a shoulder injury last season. Luzardo is only 25, and he isn’t a FA until 2027. The Marlins should know that they’re not competing, though that doesn’t mean they should just tank. Luzardo is one of their expendable guys, and they can capitalize on the bounce-back season that he put together.

When the Marlins got Luzardo from the A’s, I was particularly shocked that all it took was a half-season rental of Starling Marté. Granted, Luzardo had been injured and struggling mightily that season in Oakland, thus nearly tanking his value entirely.

Mind you, Luzardo was once a top prospect in baseball and turned heads back when he debuted in his brief showing in 2019, tossing 12 innings with a 12.00 K/9 whilst only ceding two runs. Very small sample size, but that was only the beginning. He’d go onto to throw a solid 4.30 ERA over 59.0 innings the following year, and in 2021 it all unraveled. Part can be attributed to him using his fastball more, but he also didn’t seem to be locked in. In both 2020 and 2021, Luzardo tossed his fastball 32.7% of the time — with his best pitch, his curveball, taking shotgun at 27.2%.

This previous season with Miami, Luzardo was able to put it together. He reverted back to what he saw success doing in his rookie stint and threw his curveball 30% of the time, working his fastball around it to complement it. Luzardo has a lengthy delivery as a lefty, and his fastball sizzles at 97 across the plate. Hitters slugged just .282 against his curveball this season, and had he not gotten injured in the middle of the season, he’d potentially have been a CY Young candidate.

Miami certainly won’t be turning down the right offer, so what might it take? Here’s what I put together:

I know it seems like a hefty price, that’s what it takes to get to the next level in this sport. I wouldn’t just be actively trying to get rid of Gleyber, but I can’t help but feel like he won’t be returning to the organization this upcoming year. Many people talk about Pablo Lopez being the Marlins’ arm to get, but I would take Luzardo every day of the year. The Marlins need to retool, and by only losing one guy, they can still choose whether or not they want to commit to the full rebuild.

Gleyber has certainly had his moments. There’s no doubting the talent that he possesses, but I feel like some of the ability has gotten lost along the way with all the changes he’s attempted to make to his game. When he attempted to hit like DJ, it really took a toll on his production, and while he is inconsistent, he is still a T7 2B in baseball. His defense also took a huge step forward this season, and maybe the Marlins view Jazz in a much heavier platoon role this year, given his struggles versus lefties.

Gleyber CAN play shortstop, though I wouldn’t recommend it, and the Marlins could use his bat to help their lineup. Plus, this season it’s not like he was a liability. As mentioned, his improvement defensively saw him haul in 9 DRS, and offensively he was still posted a very formidable 115 wRC+ to go with a .761 OPS.

Peraza was finally given his shot this season in September, very much past due. He came up and did everything that Yankees fans had been craving to see. His elite ability on the base paths, smooth glove at shortstop, and the 146 wRC+ he put up across 57 PA’s was just a taste. There’s no doubt he rose his stock heading into this year, and the Yankees do have a multitude of middle infielders that are on the major league level or just cracking the ice. Peraza would be a fantastic get for Miami, but it would also open the door wide open for Volpe to secure a 26-man roster spot right out of the gate. Who knows, maybe he could be 2023’s Jeremy Peña — assuming the Yankees don’t strive for service time champs, again.

Both guys aren’t the best prospects in the Yankees farm, but the Yankees do have a multitude of talent building up at catcher and in the outfield. With Austin Wells’ breakout season last year, I feel as though the organization wouldn’t mind parting with one of the other catchers in the farm. Miami could use a talented youngster to potentially pair down the line with Nick Fortes, and it wouldn’t hurt giving Breaux, who’s got a 70 raw power grade despite high a K % (28.5%), a shot. As for Dunham, he’s one of my personal favorite prospects in the system, and I feel like Miami would love his services. Dunham was one of the best producers last year at AA, as he hit 17 HR and stole 37 bases. He posted a 118 wRC+ and walked an impressive 12.2% of the time. He has a lot of tools, but like others in the farm, it’s tough to break through. I would love to see him get an opportunity elsewhere.

Will Warren is a very solid pitcher, and I feel like the Marlins would like to get another arm to make-up for the departure of Luzardo. Their farm system is particularly loaded at pitching, but their team depth in itself is very lacking. Warren would likely see relief appearances in the very near future and potentially slot into the rotation. In 18 starts at AA, he posted a 4.02 ERA and a minute 0.77 HR/9. Great location-first guy who loves to pitch to soft contact and limit the damage punches. As many may remember, he was the ask of the deadline for the Reds.

The one this whole thing is about. Luzardo would be on his way to New York, and rotation questions — as well as potential questions about certain players’ roles — would be answers. Jesus Lizard is one of my favorite pitchers in baseball and posted a 100.4 Stuff+ per Eno Sarris. That ranked higher than Musgrove, Wheeler, and Sonny Gray. Luzardo is him, and over the 100.1 innings he tossed this year, he seemed to only get better down the stretch. The years of control is the only reason this package is as hefty as it is, but I believe in his abilities enough to commit. In the second half of the season, across 71.1 innings, Luzardo hurled a 3.03 ERA, saw hitters OPS just .571 against him, and struck out 9.97 batters per nine (whilst only walking 2.40). He was electric, and I’d love to see the team get aggressive and pull the rabbit out of the hat.

Tim Locastro opted for free agency, and I don’t believe that we will see him in pinstripes again. However, the Yanks could get him in 2.0 form, with better offensive abilities, in Berti. Though he’s not an everyday guy, his multi-positional abilities and lethality on the base paths saw him waltz to a 2.2 fWAR — kinda like that Quicksilver scene in XMen. Berti swiped 41 bags, and his price may be higher than I am imagining, but he is going to be 33 this season, and I’m not sure how tightly Miami is looking to hold onto him. He has a fantastic eye and posted a very respectable 93 wRC+, thanks to his ability to work counts and get on base. He’d be a sneaky guy that sees some playing time if this deal were to go through.

In order to be competitive, moves must be made, and capital must be expended:

All of this, of course, is hypothetical. However, I feel like this would be a win-win deal for both sides. For all we know, the Marlins still may not be sold on this season’s worth of production from Luzardo and could be actively shopping their players behind closed doors. New front office, new regime, new head coach, the Jazz drama, it seems like change is brewing. This would allow the Yankees to improve at a pivotal position whilst opening the door to other youngsters seeing more playtime and adding a key versatile weapon that is a demon on the bases. As for Miami, they’d get Gleyber Torres, who could easily churn out another 30+ HR season in the blink of an eye, and a bunch of potential immediate-promotion level prospects (especially Himmothy, Oswald Peraza). It would be a great move for both sides, whilst also allowing the Yanks to shed a bit of payroll in the process and lock up the final rotation spot before going into pitchers’ and catchers’ camp.

Can’t wait to see what this offseason holds, as the Rizzo move may have just opened the floodgates. I want the Yankees to do their due diligence on everyone on the market, and even the guys that may not be on the market. Luzardo checks every box of what makes a pitcher special. He has that grit and passion for the game, and I feel like having another dominant lefty in the rotation could really pair nicely with Nestor Cortes. Let’s get ready for a wild winter ride.