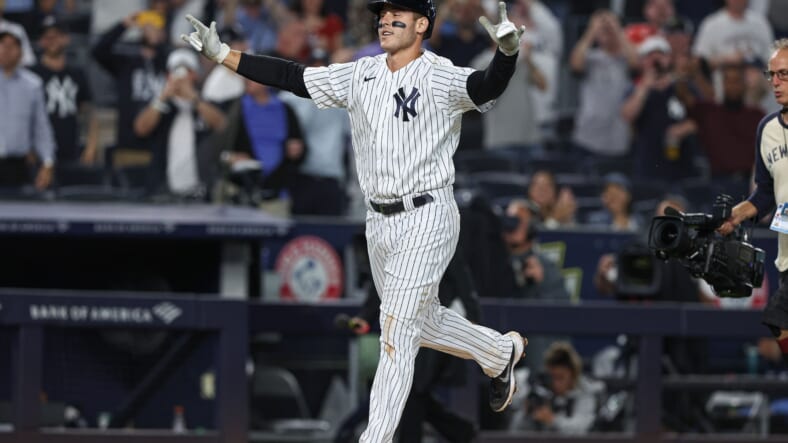 The New York Yankees and general manager Brian Cashman may have their attention focused on Aaron Judge, but retaining first baseman Anthony Rizzo shouldn’t be left out of the equation.

Consistent quality on offense and Gold Glove-caliber defense represent the primary arguments for retaining Rizzo. The first base market is also incredibly thin.

Rizzo elected to hit free agency on Sunday, following the conclusion of the World Series. He previously signed a two-year, $32 million deal with the Yankees before the 2022 season began, but he’s expecting a pay increase coming off another quality campaign.

Outstanding both ways. Will opt out, but qualifying offer may be tricky call for him. Teams: Yankees, Giants, Rangers. Expert: $40M, 2 years.

The Yankees will need to pay up for Anthony Rizzo:

Rizzo‘s projected deal has him at $40 million over two years, an $8 million pay raise across a similar timeframe compared to his last contract. That is $4 million in addition per season, which is a hefty number given he’s about to turn 34 years old next year. It’s well worth the financial commitment, though.

Supplementing his loss would not be an easy task. The top first basemen on the market include Brandon Belt, Josh Bell, Carlos Santana, José Abreu, and Yuli Gurriel.

The only other option I would seriously consider is Bell, who hit .266 with a 36.2% on-base rate, including 17 homers and 71 RBIs this year. His defense isn’t his strong suit, but he’s a stout offensive player that may come in at a cheaper price point compared to Rizzo. His switch-hitting bat is also a perceivable asset.