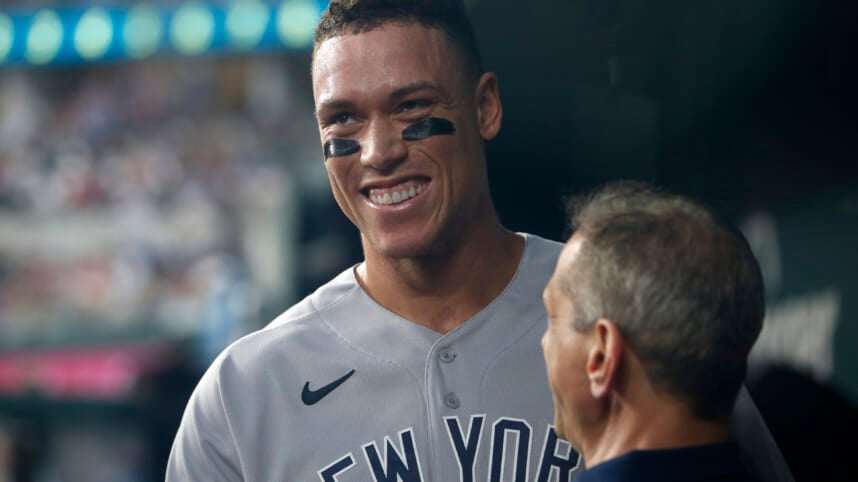 With the Yankees 2022 season now having ended, the offseason is in full swing. The biggest, and most pressing of matters, remains to be Aaron Judge’s impending free agency. There’s no denying the fans’ want for Judge to stay, and Aaron has expressed that he has not changed his mind on wanting to stay, yet there’s an overwhelming sense that Judge may not return in Pinstripes.

Whether that be hypothetically created in our own minds, many fans are bracing for Aaron Judge to go elsewhere this offseason, with San Francisco being the favorite. Jon Heyman spoke on the matter and stated that even if the Yankees pay Judge what he wants, he may test his talents elsewhere:

“There appears to be some real concern within the Yankees’ ranks about their chances to keep Judge. The Yankees expect to be the high bidder — figure they’ll start just north of his original ask of $36M per year. They just aren’t sure how badly he wants to stay.”

The Yankees are losing their allure:

Following the monumental collapse in the ALCS vs Houston, there have been dozens of stories and headlines that lead one to believe all is not well in the Yankee front office and clubhouse. With players coming out and saying that the Stadium was too brutal to them and that the boos and shouts of hatred didn’t sit well with them at all.

Gleyber Torres has also come out and stated that he is unsure of what his future holds and that the roller coaster of a season had taken a toll on him — from being linked to trades for Pablo Lopez and the immense August struggles. Yet, Judge was often the most immune to all the booing and jeers from the crowd. That is until postseason baseball ramped up, and whether he likes it or not, Judge did fail to deliver.

The Yankees will have some fierce competition for Aaron Judge’s signature:

However, he did not deserve to be booed in any facet of the game, and his historic 2022 season was the lead reason the team was even there in the first place. Maybe the boos didn’t sit right with Judge, who is a known team-first guy and leader in the clubhouse. Or maybe, he just wants to return to the West Coast and play baseball in California.

There have been murmurs that the Dodgers may let Trea Turner walk and turn their sights toward bringing in Aaron Judge (thus moving Mookie Betts to 2B). As previously mentioned, the favorites behind the Yankees to land him, the Giants, stated that there is “no price they wouldn’t pay” to land him. If the Giants go all out, it’ll be interesting to see if the Front Office decides to fight for him.

The Judge situation only further reinforces many peoples’ belief that the Yankees’ failure to sign Judge last offseason (or even prior, like many franchises, try to do with their franchise players) has only made this that much worse.

The Yankees are the Yankees, and their brand and identity will continue to lift their organization to the top of the charts in the overall value of the club, and the revenue streams will continue to pour in. Yet, the Yankees baseball that we have been watching since 2009 — the team’s last WS appearance, has not met the expectations set prior. The Phillies hadn’t reached the World Series since 2009, much like the Yankees, and hadn’t made the playoffs since 2011. Now they are in the big show, thanks to a should-have-been-Yank, Bryce Harper.

I don’t want the Yankees to let Judge walk only for his talents and abilities to bring good fortune to the organization he plays for immediately. We have seen this time and time again, but the Yankees must either commit to their guy — the biggest name in New York and in baseball — or allocate the financial resources commitment they would make elsewhere. Buckle up, Yankees fans, this ride could make the postseason look like a doozy.