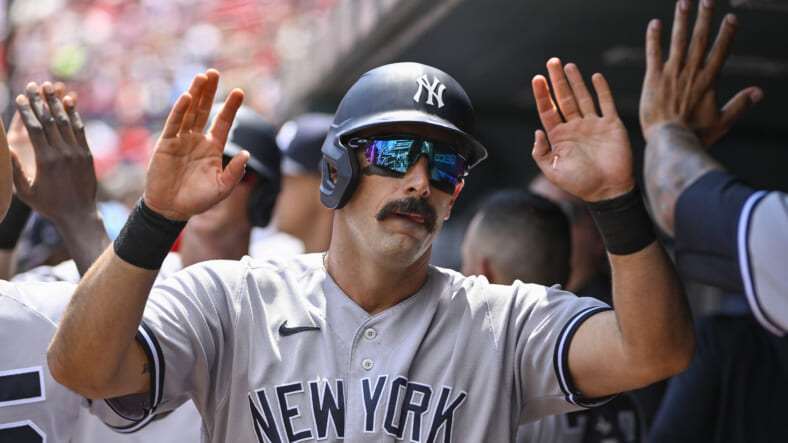 The New York Yankees were down another slugger on Monday after lefty Matt Carpenter fouled the ball off the back of his left foot, leaving the game prematurely against the Seattle Mariners.

Carpenter was knocked out after just the first inning, in which the Yankees scored two runs before Jameson Taillon allowed the Mariners to hit back with a solo shot. Carpenter was replaced by Tim Locastro, filling the vacant DH slot in the batting order.

The former St. Louis Cardinal is in the middle of a resurgent season with the Yankees at 36 years old.

The Yankees landed a new and improved Matt Carpenter:

Over 46 games, Carpenter is hitting .307 with a 41.4% on-base rate and .732 slugging percentage. After hitting sub .200 the last two seasons in St. Louis, he refined his swing after going on a cross-country trip to make corrections.

Carpenter has recorded a 42.1% hard-hit rate, 13.7% barrel rate, and 22.4° launch angle in 2022. Posting a 53.3% flyball rate and 60% pull percentage, it is no wonder he’s already tallied 15 homers over just 153 plate appearances. Defensively, Carpenter has filled multiple roles, but his best usage is in the designated hitter spot.

Losing Carpenter would be a significant blow to the Yankees moving forward, so hopefully, the injury is nothing more than a bruise on his foot.