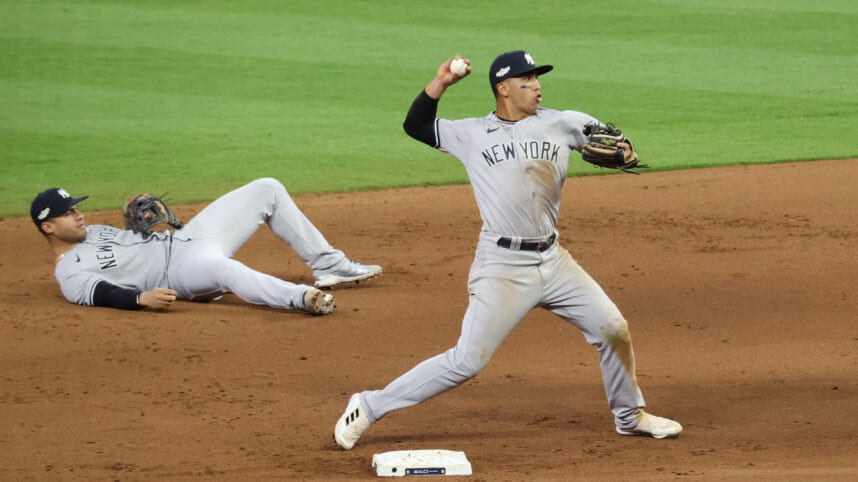 The New York Yankees wish they had Oswald Peraza during the ALDS when they benched Isiah Kiner-Falefa and shifted Oswaldo Cabrera to the infield. Ideally, Cabrera would’ve stayed in left field, and Peraza would’ve taken over at short, but manager Aaron Boone elected to leave the rookie off of the roster against Cleveland.

Boone didn’t make that same mistake twice, using Peraza in Game 2 of the ALCS on Thursday night, despite the team’s 3–2 loss. Peraza didn’t offer much offensively, but none of the Yankee hitters performed well against Framber Valdez, who struck out nine batters over seven innings.

Providing Peraza with more at-bats down the stretch of the regular season would’ve been the more beneficial strategy, but the team reinforced their confidence in IKF, who didn’t even make it the entire ALDS against a lesser opponent in Cleveland before heading to the bench.

Over 15 at-bats during the postseason, IKF has tallied four hits, one walk, and three strikeouts. He does feature a .267 average with a 35% on-base rate, far better than some of the other Yankee infielders — notably Gleyber Torres and Josh Donaldson.

The Yankees need offense but they can’t compromise their defense either:

The offensive quality may end up being the deciding factor for Aaron Boone, who is still trying to determine who will play SS in Game 3 against the Houston Astros in the Bronx.

Peraza features more slugging potential than IKF but isn’t as sound of a contact hitter. At the very least, Kiner-Falefa is good at putting the ball in play, even if it is a weak grounder to one of Houston’s infielders. Nonetheless, Peraza offers elite defense, as he displayed in Game 2 with a few flashy moments.

Given Peraza might’ve saved a few runs with his incredible defensive efficiency, if his bat can come around, he should be the easy option to feature in the Yankees infield. At this point, they seemingly can’t trust IKF to make routine plays, while Peraza was smooth in his delivery and showed sleight of hand on a few occasions.

Ultimately, Oswald simply needs to see more pitches. The Yankees are expected to face Lance McCullers Jr., a lesser opponent on the mound compared to Justin Verlander or Valdez, who are both in the Cy Young conversation this year.

It is a difficult decision for Boone to make, but the elite defense Peraza offers, and his slugging capabilities suggest he is the better option.