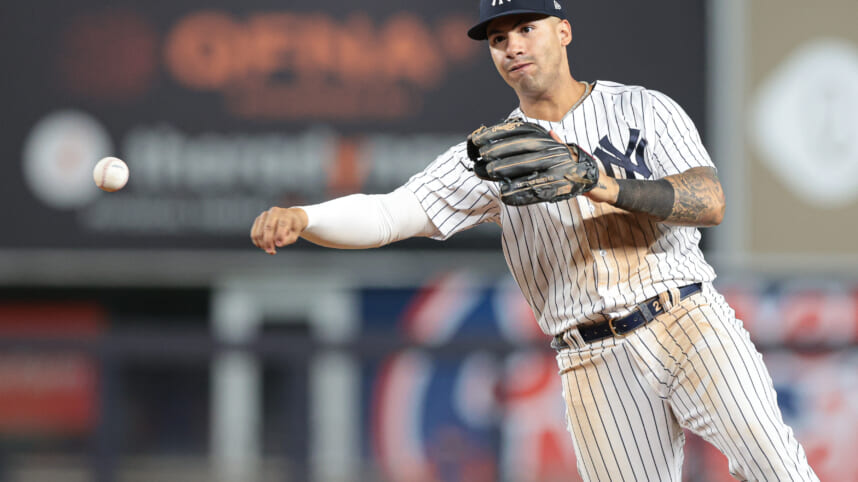 The New York Yankees lost a disappointing game against the Los Angeles Angels on Monday night, 4–3. Starting pitcher Frankie Montas gave up four earned runs on eight hits across 6.0 innings. All four runs came courtesy of homers, with the final blow coming off the bat of Shohei Ohtani, who drove in Mike Trout to give the Angels a two-run lead in the bottom of the 5th inning.

The Yankees simply looked outmatched against a struggling Los Angeles squad, but they did get some good injury news prior to the start of the game.

Star closer Clay Holmes finally returned from the injured list, and Nestor Cortes is gearing up to throw a bullpen session in Tampa later this week.

The Yankees keep shooting themselves in the foot:

Poor fielding hurt the Yankees against Los Angeles, something that manager Aaron Boone noted after the game.

Starting second baseman Gleyber Torres botched a routine double play, failing to get his foot on the second base bag, an inexcusable error that must be avoided against teams that have elite caliber hitters like Trout and Ohtani.

“You’ve got to make sure you’ve got the bag,” Boone said. “That’s not one you’ve got to rush (the throw) and obviously these guys train (to make sure they touch the bag) over the last years. That’s all they know. Hold the bag. When I played, you did (what Torres did).”

via Randy Miller of NJ.com

Torres has been struggling the last few weeks, hosting a .242 average and a 29% on-base rate this season. In the month of August, he’s hitting .177 with a 20% on-base rate, failing to record a hit over his last two games, a sample size of eight at-bats. With Torres struggling to get on base with a career-low 6.1% walk rate, his offensive contributions have been negligent.

The Yankees need him to start ramping up before the playoffs, otherwise, he could lose his starting spot to Oswaldo Cabrera, who’s been playing in right field, taking reps away from Aaron Hicks with Aaron Judge featuring in center.

Defensively, Torres is having a better campaign, breaking even in the defensive runs saved above average category with zero.

Last year, he featured -10 defensive runs saved, but his .981 fielding percentage at second base is a solid number, hosting just seven errors. However, when you pair his ice-cold bat with defensive mistakes, it is something the Yankee simply can’t tolerate down the stretch.