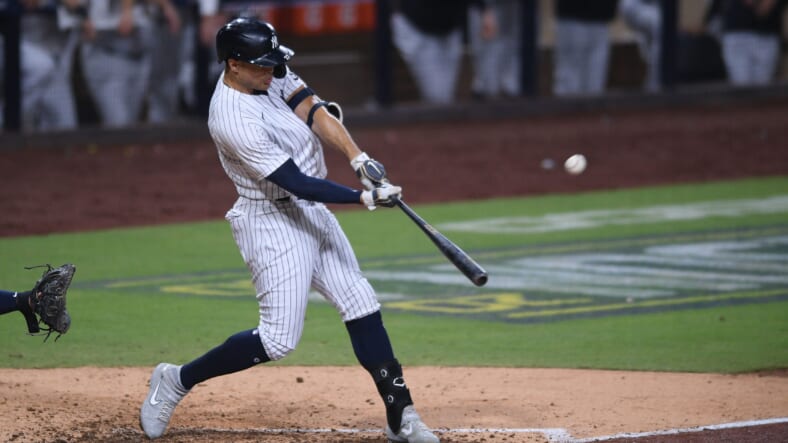 The New York Yankees were able to get their second win of the young MLB season. It came yesterday in the series opener against the Baltimore Orioles, and the final score was 7-0.

When the game was still close, Yankeesâ€™ slugger Giancarlo Stanton, who was getting booed by a portion of the crowd, deposited a middle-middle pitch on the other side of the wall for a grand slam that broke the game open.

Upon punishing the ball at 115 miles per hour and sending it 471 feet away, Stanton took a couple of seconds to admire the beauty of the blast. The sound, the ball leaving the park in a hurry, the distance, the crowd. Everything.

Then, he tossed his bat and started his jog around the bases. The Yankees were up 6-0 at that point.

It was the eighth grand slam of Stantonâ€™s career. â€œSometimes thereâ€™s no sound — thereâ€™s not anything except you watching the flight of the ball,â€ he told MLB.com. â€œYou donâ€™t know anything else thatâ€™s going on, and itâ€™s a very cool feeling. Itâ€™s hard to describe very specifically, but itâ€™s kind of like a blacked-out zone and an in-sync feeling. Youâ€™ve got to enjoy it and make sure you have a nice finish on it.â€

Before his majestic slam against Shawn Armstrong, Stanton was 0-for-10 in the young season, and some Yankeesâ€™ fans had enough, as difficult to believe as that sounds.

â€œThe way he hits them, itâ€™s just different,â€ Yankees manager Aaron Boone said. â€œItâ€™s like nothing else. He is a unicorn. That ball was so pure.â€

Fellow Yankeesâ€™ slugger Aaron Judge was happy for his teammate. â€œYou always want to get that first hit out of the way, you want to get the first RBI and the first home run,â€ Judge said. â€œWhen you get it off your back, now itâ€™s time to go. I donâ€™t think mine went as far as Big Gâ€™s, but wherever they go, they still count.â€