Yankees make long-awaited starting rotation decision, but what does it mean? 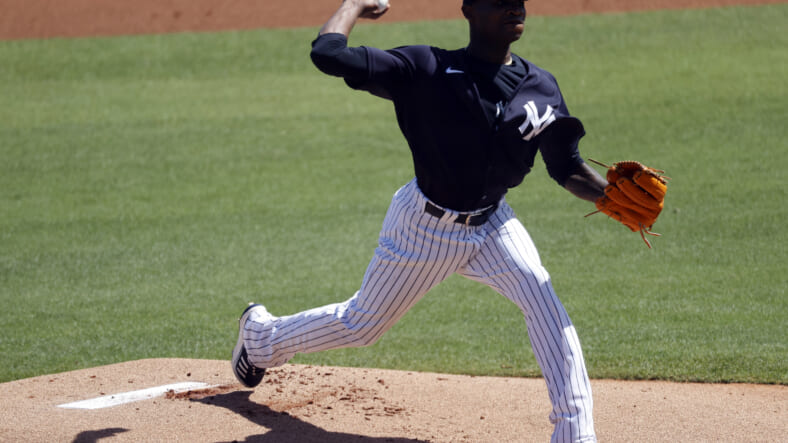 The New York Yankees have already established they will roll with a five-man rotation on Opening Day next week. With that being the case, the Yankees needed to send one player down to Triple-A, and they elected SP Deivi Garcia. What does this mean?

Well, it guarantees that Domingo German will win the fifth spot in the rotation, and he deserved it based on an absolutely stellar spring. At 28 years old, German served an 81 game suspension last year, missing all of 2020 and the final portions of the 2019 campaign. The Yankees desperately missed him during the post-season, but they offered him a second opportunity to show he deserves to be with the team and that heâ€™s overcome his personal challenges. In fact, he recently married his girlfriend, and maybe that has spurred an absolute dominant past few weeks.

German finished the spring with a 0.00 ERA over 9.0 innings. He allowed five hits, zero runs allowed, one walk, and struck out 13 batters. Overall, he was utterly fantastic, despite GarcÃ­a giving it his best â€” it wasnâ€™t enough at this point in time considering how great German looked. That doesnâ€™t mean Garcia wonâ€™t play an integral part in 2021, especially since injuries arise during an entire 162 game season. Garcia will be the first-choice pitcher to get called up if needed.

The Yankees will use Deivi soon, as Aaron Boone conveyed:

â€œMy message to him I tried to convey was, â€˜Stay ready, weâ€™re gonna need you,â€™ â€ manager Aaron Boone said. â€œ â€˜Make sure you handle your business down there.â€™ â€

â€œHe has shown himself to be a guy with a lot of promise, not only for the future, but to help us this year,â€™â€™ Boone said.

Unfortunately, a tough outing against the Toronto Blue Jays this past week sealed the deal for Garcia, as he allowed seven hits and four earned runs over just 3.0 innings. An unfortunate ending to his spring, but he proved at 21 years old that he can compete with the best of them and that he will likely be featuring in the starting rotation very soon.