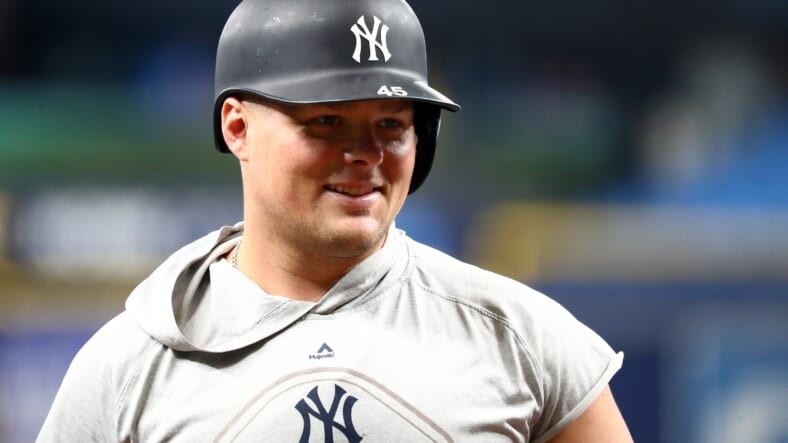 In a must-win game 4 against the Tampa Bay Rays in the ALDS on Thursday evening, the New York Yankees came storming back to tie the game at 2-2. Thanks to a solid offensive performance, the Bombers were able to push the series one more game, but their pitching was the catalyst all evening.

Starter Jordan Montgomery was magnificent, lasting 4.0 innings and allowing just one run and three hits. On the other hand, the bullpen was also tantalizing, not allowing a single hit over five innings.

– Luke Voit on the feeling in the Yankees' clubhouse heading into Game 5 pic.twitter.com/jVqsNdxBWz

Voit finished game two with a solo home run in the second inning, getting the Yankees started and activating their offense once again. Voit has been the catalyst this season in the lineup, playing through a foot injury and noticeably limping around the field.

His will to fight on has been admirable, while players like Aaron Judge and Giancarlo Stanton have missed significant time with their own individual issues.

Nonetheless, the Yankees and Rays will have a legendary matchup on Friday evening. With Gerrit Cole on the mound, posting six innings of work and allowing three runs in game one, Tampa Bay will be utilizing Tyler Glasnow, who is only on two days of rest after pitching five innings and 93 pitches on Wednesday.

This is Coleâ€™s biggest game in pinstripes up to this point, and exactly why the Yankees gave him a $324 million deal over nine-years. He needs to show up in this contest and lead them to victory, bringing the team one step closer to the World Series. Facing off against the Houston Astros in the ALCS just seems like destiny at this point.