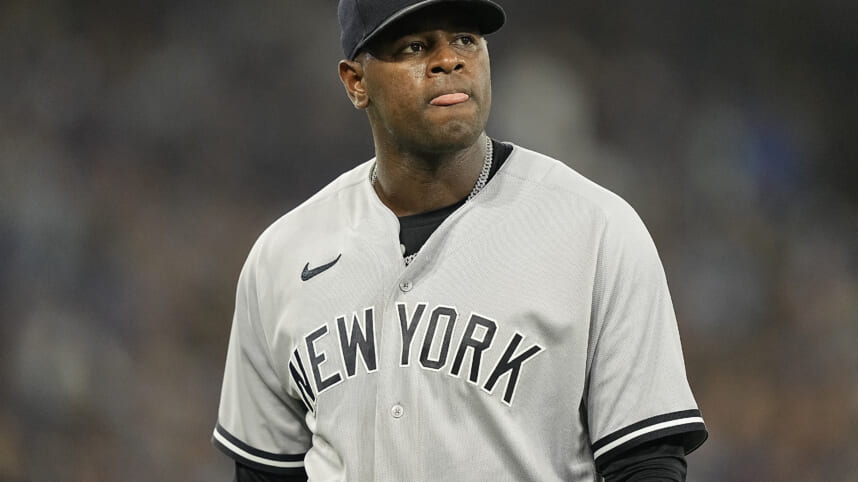 New York Yankees starting pitcher Luis Severino had a tumultuous Game 3 in the ALDS against the Cleveland Guardians. After tossing 31 pitches in the first inning, Severino managed to get out of trouble and last nearly six innings, allowing three earned runs, eight hits, and six strikeouts. He tossed 106 total pitches, but a resilient showing allowed the Yankees to stay in the game and give themselves a chance to steal Game 3 after falling behind early.

While the Bombers didn’t record many hits, just five compared to Cleveland’s 15, they got a few timely homers from Aaron Judge, Harrison Bader, and Oswaldo Cabrera. Unfortunately, it wasn’t enough after Yankees manager Aaron Boone made a strange decision in the bottom of the 9th inning to try and close out Cleveland.

The Yankees made a terrible pitching decision:

Rather than use their trusty closer, Clay Holmes, Boone preferred to stick with Wandy Peralta and utilize Clark Schmidt, a young player who had never seen a playoff game before, in the most high-leverage moment.

Unfortunately, Peralta allowed two hits and two earned runs in the bottom of the 9th, with Schmidt giving up the final blow. After the game, Severino was bewildered at the decision, pointing reporters toward Boone and pitching coach Matt Blake for their strange judgment.

“He’s our closer. So of course I was surprised. I don’t know if he was down. There shouldn’t be people down in the playoffs. That’s something you guys need to ask Boone or [Matt] Blake to see what was going on there.”

Sometimes you need a pitcher to step up and offer their services at the end of the game, especially during the postseason when every game is life or death. After losing in the 9th, the Yankees now have to climb back from a 2–1 deficit in the series, starting on Sunday evening with Gerrit Cole on the mound. He will face off against Cal Quantrill, who gave up four earned runs over 5.0 innings in the series opener this past Tuesday.