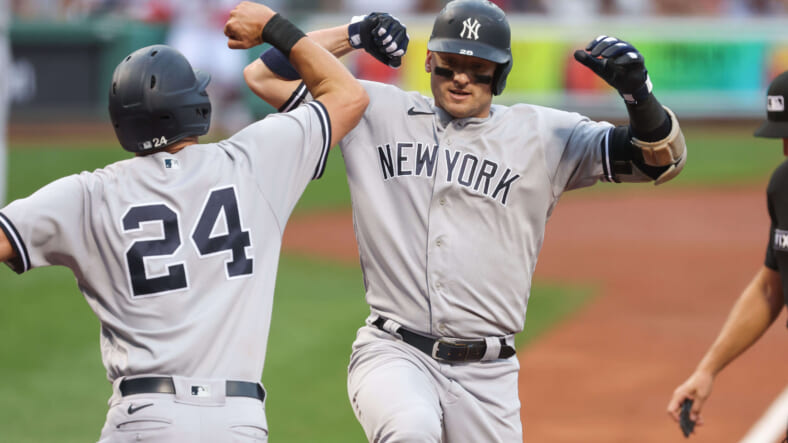 The New York Yankees currently have a projected total payroll of $201.6 million, including post-arbitration contracts. However, after signing Isiah Kiner-Falefa and Lou Trivino to one-year deals, the team has already started avoiding arbitration hearings with similar contracts to save time.

The Bombers have about $63 million left until they reach their 2022 total payroll, but owner Hal Steinbrenner could push beyond that luxury tax threshold and into a higher bracket if he’s willing to spend more. The Yankees still haven’t retained Aaron Judge on a contract extension, which is expected to cost around $40 million per season.

If general manager Brian Cashman would prefer to stay in the 42.5% luxury tax sub-charge bracket, he may have to offload some loaded contracts already on the roster.

According to Joel Sherman of the New York Post, the Yankees will “work hard” to get rid of Josh Donaldson and Aaron Hicks’s deals.

The Yankees must save some money from Josh Donaldson and Aaron Hicks:

Moving on from Donaldson and Hicks represent the two easiest ways to clear salary space. As if Donaldson’s lackluster hitting in 2022 and baggage aren’t enough to justify sending him on his way, his $21 million salary with an $8 million buyout for the 2024 season is even more of a reason.

At 36 years old, Donaldson hit .222 with a 30.8% on-base rate, including 15 homers and 62 RBIs across 132 games this past year. While he played Gold Glove-caliber defense on the hot corner, his offensive contributions were nowhere near what the Yankees expected. Considering he hit 26 homers in 2021 and recorded a 35% on-base rate, seeing his numbers plummet by a significant margin certainly wasn’t ideal. In fact, he recorded a sub-100 wRC+, indicating he was a below-average MLB player.

Finding an alternative team to take on his entire salary may be difficult, but Cashman could move him and agree to pay a portion of his contract to a team that may need a solid defensive infielder with some juice left in the tank. Acquiring Donaldson from the Minnesota Twins, to begin with, was an extremely risky move.

In addition to Donaldson, moving on from Hicks is also a reasonable course of action. Hicks is set to earn $10.5 million and has three years left on his deal before a club option in 2026. Considering his statistics have fallen off a cliff, saving that salary space would be essential toward bringing on more productive talent. Hicks hit .216 with a 33% on-base rate this past season, including eight homers and 40 RBIs. He hosted a 90 wRC+ over 130 games. Unfortunately, with Harrison Bader taking over in center field, there simply isn’t a starting spot to offer Hicks.

The veteran outfielder could slide in at left field, but it seems as if the Yankees are keen on either retaining Andrew Benintendi or pursuing Masataka Yoshida from Japan. If they strike out on both of those players, they may prefer Oswaldo Cabrera well before presenting Hicks with another opportunity.

The probability of the Yankees clearing the full $31.5 million off the books is unlikely, so I would expect Cashman to make a few difficult decisions just to offload some of the salary, which he can reallocate to other positions.