Yankees: Just how great has Michael King been in the bullpen? 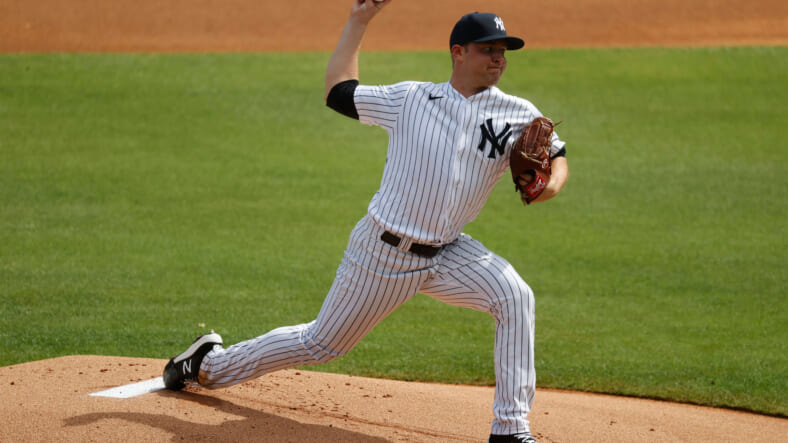 When you think of the Yankees, you think of the bullpen. For years the Yankees have boasted an elite bullpen, and this year is no different. In spite of injuries, they’ve put together another solid unit, and there are a lot of people to give credit to. The first that comes to mind is the brilliant Jonathan Loaisiga, with his supporting cast of Chad Green, Lucas Luetge, Aroldis Chapman, Wandy Peralta, Clay Holmes, and Joely Rodriguez.

Michael King has beenÂ elite out of the bullpen for the Yankees, and I think it’s time we acknowledge that.

On a Whole New Level

Michael King in 2020 was putrid, posting some of the worst numbers for any pitcher in the shortened season. A 7.76 ERA, 5.14 FIP, 5.09 xFIP, and 4.59 SIERA are all below average for a pitcher. His biggest problem was his command, walking over 9% of all batters faced despite being a control artist in the minors. He shined in a six-inning 0 run performance against the Blue Jays early in the season and then took off from there.

While as a starter for the Yankees, Michael King has been mediocre, as a reliever, he’s been elite.

While Whitlock obviously has more volume out of the bullpen this year and is the more valuable pitcher, Michael King, on a per-rate basis, matches up well with him. He’s been really good as a reliever, but what changed from 2020 to 2021?

In 2020, Michael King’s sinker posted a 6 Run Value, making it the 10th worst Sinker in the sport in that metric. In 2021? His sinker has posted a -5 Run Value, which ranks 38th among 348 qualified pitchers. His primary pitch was that sinker, and so for it to go from putrid to great obviously has factored heavily in his progression, but how did the pitch develop so rapidly?

Well, in 2020, his sinker induced a .411 wOBA against, for context, Fernando Tatis Jr. has a .408 wOBA on the season. This meant that hitters would put up Fernando Tatis-like numbers against his sinker. In 2021? He’s got a .303 wOBA against on the pitch, which is the same wOBA as Gleyber Torres this year.

The difference between the wOBA output is the location of the pitch.

That’s because Michael King uses his sinker lower in the zone, and it has generated a 1-degree launch angle against in 2021 compared to an 8-degree launch angle in 2020. He’s getting more groundballs on his sinker, and it’s allowed him to avoid giving up bad contact and will enable him to elevate with the fastball for a whiff or go down and away with a breaking ball. The sinker has opened up the door for Michael King’s success, so what should be his role going forward?

Michael King’s role this season could very well come into shape in the postseason more than the regular season. The utter dominance of his most recent bullpen stretch and the length he provides as a 2-4 inning arm allows the Yankees to deploy him in multiple ways. 6th and 7th inning outings can be wrapped into one and save an arm in a tight series. He could come into a one-run game, and I’d be fine with it.

He may not be the most recognizable guy, but King has earned a high leverage role. Every time he pitches in relief, he dazzles, so maybe he’s a new late-inning guy. Maybe the Yankees keep his role fluid, and that’s the best way to operate. The sky is the limit for Michael King, and the Yankees know this.

Whatever path the Yankees lead him on, he will shine. He might not have the recognition of Chapman, the talent of Loaisiga, or the dominance of Holmes, but he can be a long-relief option with high upside.