Yankees could have their best reliever back by next week 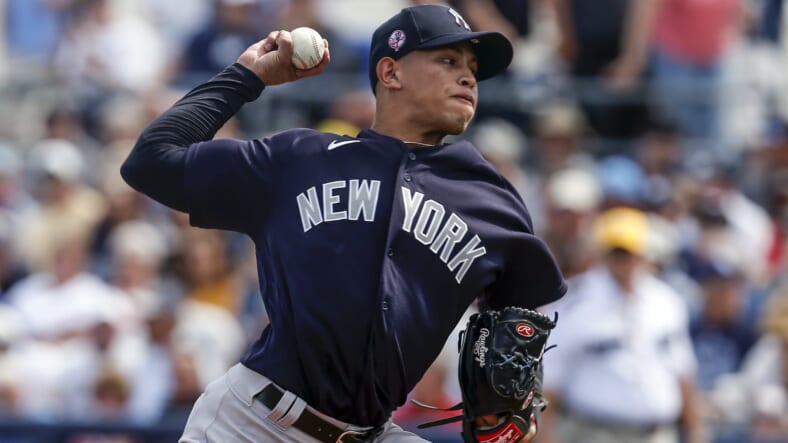 As of Wednesday morning, the New York Yankees are still out of the playoffs. They are half a game behind the Toronto Blue Jays for the second Wild Card spot and two games behind the Red Sox for the first berth.

And while the Yankees have certainly suffered the injury bug all season long, they have been slowly recovering soldiers for the battle. Starters Corey Kluber and Clarke Schmidt recently came back after long-term absences, while Luis Severino made his first appearance since 2019 on Tuesday.

Pitcher Domingo German will return this week, too. The Yankees, however, need their best and most reliable reliever if they are going to mount a serious charge at one of the two Wild Card spots.

Jonathan Loaisiga, who went down with a rotator cuff injury on September 3, took a step forward by stretching his throwing program to 120 feet on Tuesday. The Yankees are now confident he will be able to return next week.

The Yankees could really use Loaisiga

The next step would be throwing a bullpen session, which could come on Friday.

â€œIâ€™m very encouraged,â€ Boone said to NJ Advance Media before the Yankees-Texas Rangersâ€™ game at Yankee Stadium. â€œI watched most of his catch play (Tuesday) and I thought he looked really good. It doesnâ€™t look like heâ€™s favoring anything. Thereâ€™s life on it without a lot of effort. Itâ€™s just catch play at 120 feet, but the first thing I noticed when I saw him throwing was, â€˜Wow, that looks free and easyâ€™, which is encouraging to see.â€

Loaisiga has carried the Yankeesâ€™ bullpen throughout the whole season, with a 9-4 record and a 2.25 ERA in 54 outings.

After he throws his bullpen on Friday, the Yankees will evaluate the next steps for him. He could throw another bullpen or face hitters in a sim game.

â€œWeâ€™ll see,â€ Boone said. â€œThatâ€™s something that weâ€™ll kind of watch as we go. Obviously, the trainers will have a big role in that in deciding how many of those he needs, how sharp they are, how heâ€™s recovering from those. Because he wasnâ€™t down very long, he probably in theory shouldnâ€™t need too much (rehabbing), but hopefully he passes those and we do get him back before the regular season ends.â€