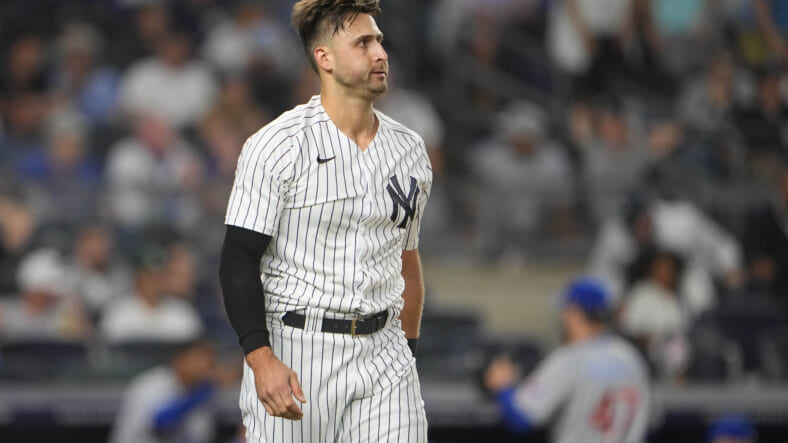 Transitioning from the Texas Rangers to the New York Yankees has been a nonstop battle for slugger Joey Gallo. The 28-year-old had a fantastic career with Texas but has struggled considerably in the Bronx, hitting .159 this season with a 28% on-base rate, 12 homers, and 24 RBIs.

At the end of the day, Gallo hasn’t produced enough offensive efficiency to justify being retained at the deadline, but his experience playing for the Yankees has been nothing short of ugly.

Gallo spoke with NJ.com regarding his experience in the Bronx, indicating his desire to leave by 6 PM at the trade deadline on Tuesday.

Gallo is ready for the trade deadline to be over, but he’s already preparing to move out of his apartment to a team where he can make a difference.

Joey hasn’t had the privilege of enjoying New York City and everything it has to offer. Instead, he stayed off the streets and hid from fans who may heckle him and deteriorate his confidence further.

Q: What’s it been like for you when Yankees fans notice you on the streets? Are they rough on you away from the ballpark, too?

Gallo: I don’t go out in the streets.

Gallo hit 38 homers last season, one of the best marks of his career, hitting about .200 with a 35% on-base rate. However, the moment he became a Yankee, his statistics fell off a cliff.

I went through a lot of adversity and I really had to question myself a lot. My confidence suffered. I would say I hit rock bottom for the big leagues. So for me, I just was trying to remember to be a good teammate, play the game the right way, play the game hard and not do something stupid that I’d regret. I learned a lot about myself, I guess. Baseball is a tough game. But it definitely made me stronger because not many people have gone through what I’ve gone through.

Q: Do you think Yankees fans were too tough on you?

Gallo: I don’t know how they usually are, but I don’t know how much tougher they can get. Pretty much every team we play, players from that team reached out to me to say, ‘Hey, bro, keep your head up. Don’t listen to them.’

Yankee fans are notoriously hostile and aggressive when it comes to players struggling for their team. Decades of prolonged success can do that, which is why Gallo is likely to be traded at the deadline on Tuesday.

After acquiring Andrew Benintendi from the Kansas City Royals, this is the best course of action for both parties, especially out of respect for Gallo’s confidence and career.