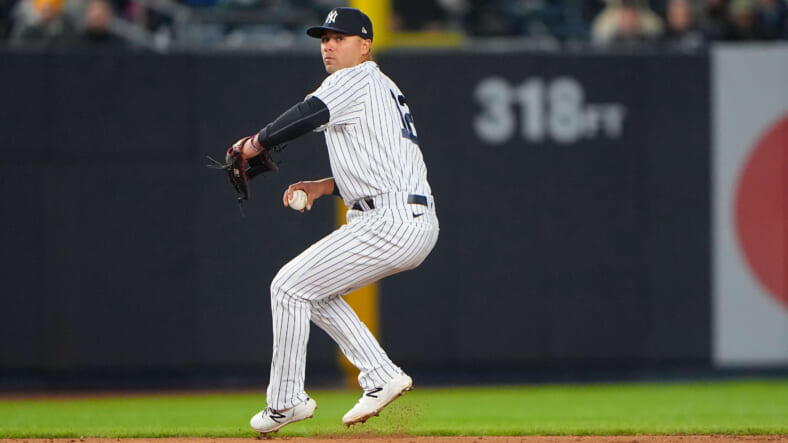 The New York Yankees made a significant infield change prior to Game 4 of the ALDS on Sunday night. Manager Aaron Boone realized they needed fresh blood at shortstop after Isiah Kiner-Falefa struggled considerably in game 3, allowing two runs to score on playable balls.

In the first inning, a ball went underneath IKF, and while it was a tough play, he should’ve tried to get his body in front of it to limit runners in scoring position. However, it snuck underneath him, and Cleveland managed to get on the board.

Later on in the game, IKF fielded a ground ball but took too long to make the throw, allowing the runners to arrive safely and eventually produce a run that would end up giving Cleveland a 6–5 victory.

The Yankees were forced to make a change at SS: Oswaldo Cabrera for Isiah Kiner-Falefa

With those defensive blunders in mind, Boone shifted to a different strategy in Game 4, starting Oswaldo Cabrera at shortstop and Aaron Hicks in left field. He was likely kicking himself that he left Oswald Peraza off the roster and included Marwin Gonzalez, but he made the change anyway, effectively benching Kiner-Falefa.

In Game 3, IKF struck out once and failed to get on base but recorded three hits combined in the previous two playoff games. He wasn’t performing poorly offensively, but when your defensive qualities aren’t showing up, sometimes it is best to make a forced change.

“It sucked,” Kiner-Falefa said. “It’s a game you always want to play in, but I’m just happy we came out with the win.”

Boone stated that IKF was “pressing,” trying to do a bit too much and avoid mistakes instead of just playing natural baseball. IKF refused that justification, indicating he thought he played well despite the issues.

“I just thought they were tough plays that could have went either way that I expected to make,” he said. “I didn’t really feel like I was pressing, especially after the first two games I had in the series. I thought I had played pretty well. It’s just more of just not making some plays that the team needed in a big spot. I wish I could have those plays back but we came out with a win today.”

In Game 4, Cabrera took the field at shortstop, looking like his normal stout defensive self. He collected a few routine ground balls and turned a big double play, not making any mistakes or causing any blunders. The Yankees just need a solid player at short who isn’t going to botch any routine opportunities.

“Handled everything well,” Boone said. “A couple of tricky plays. I thought the (Josh) Naylor play to his left, kind of the ball hopped up on him (and he) handled it well (and) turned a big double play.”

We should expect to see Cabrera back at short for Game 5 in the Bronx on Monday while IKF rides the pine once again.