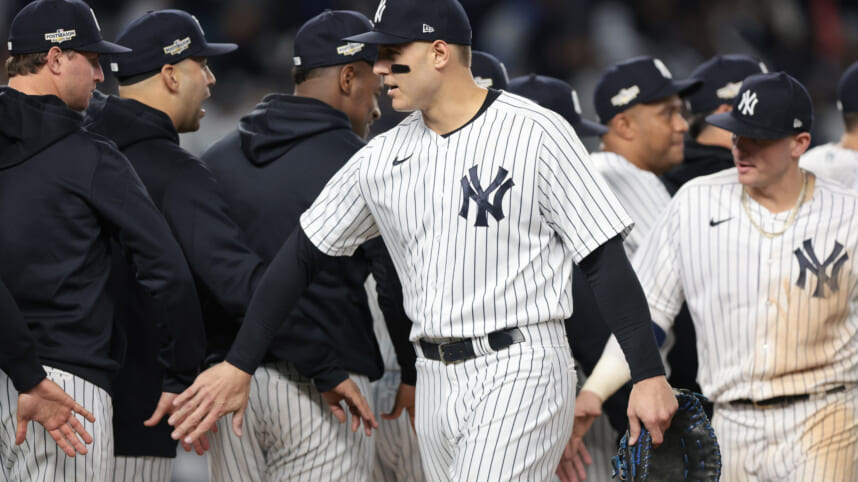 The New York Yankees had several stand-out players against the Cleveland Guardians on Tuesday in Game 1 of the ALDS, but none stood out more than first baseman Anthony Rizzo. Without Rizzo‘s contributions, the Yankees might’ve found a way to lose, considering his excellence on both the offensive and defensive sides.

Having signed Rizzo to a two-year, $32 million deal this past off-season with an opt-out after the 2022 campaign, the Yankees were hoping to could get extraordinary value from the veteran.

The Bombers had looked at Matt Olson and Freddie Freeman, striking out on both, settling for Rizzo, who has turned out to be a fantastic asset.

The Yankees needed someone to step up and Anthony Rizzo answered the call:

To start the postseason this year, Rizzo recorded one hit over four at-bats, but his hit was one of the game’s biggest moments, launching a two-run homer with Aaron Judge on base in the bottom of the sixth inning to give the Yankees a 4–1 lead.

All it takes is one swing to change the course of the game, and Rizzo gave them the necessary cushion to escape a pitching dual during the first half.

However, Rizzo didn’t only provide a big spark on offense; he also came through on defense, scooping several balls out of the dirt to prevent errors.

Specifically, José Treviño bounced a ball in the dirt that would’ve caused some trouble for the Yankees, driving in a run, but Rizzo scooped it with ease.

Later on in the game, Rizzo collected a ground ball at first base, stepped on the bag, and chased a runner down heading to second, producing a big double play that would help the Yankees push to the ninth inning.

Considering the 33-year-old veteran first baseman has plenty of playoff experience, he understands what it takes to win games during elimination rounds. In fact, he’s played 41 games during the postseason, an essential number to consider when regarding his value.

Clearly, he has taken his game to another level and will be looking to compound his success in Game 2 against Cleveland with Nestor Cortes on the mound.