Yankees have one player on fire to start September 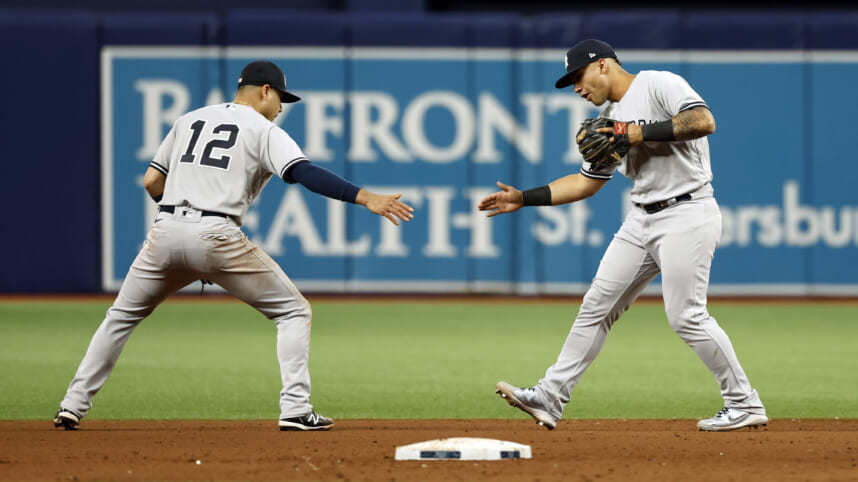 The New York Yankees have been patiently waiting for Isiah Kiner-Falefa to provide substantial value after being acquired before the 2022 season began from the Minnesota Twins. General manager Brian Cashman had high hopes for IKF, especially after winning a Gold Glove at third base and showcasing solid defensive qualities at shortstop.

Since the Gleyber Torres experiment didn’t pan out at SS, Kiner-Falefa was meant to serve as a stopgap until Anthony Volpe was ready to take over in a few years. However, Volpe has already elevated to Triple-A Scranton and is completely dominating, meaning 2023 could be the year he gets pulled up at just 22 years old.

The Yankees needed someone to step up:

In the meantime, Kiner-Falefa has had a polarizing season with the Yankees, showcasing dismal results in August but having a dominant start to the month of September. In August, he hit .231 with a 29.9% on-base rate, including 18 hits and one homer over 78 at-bats. He started off this month on fire, hitting .370 with a 41.4% on-base rate, .630 slugging, 10 hits, and two homers over 27 at-bats.

Ever since the Yankees shifted IKF to third base, he’s been on a tear, but with Josh Donaldson back from paternity leave, the Yankees have transitioned him back to his normal position at short.

Isiah Kiner-Falefa to the rescue:

With injuries plaguing the team, specifically DJ LeMahieu heading to the injured list with a toe issue and Anthony Rizzo battling headaches and lower back problems, they needed someone in the infield to step up. Oswald Peraza has looked solid defensively and showcased a bit of efficiency on offense as well, but the 27-year-old shortstop has picked up the pieces in the meantime.

The Yankees have won five of their last seven games, displaying a bit more resiliency than they featured in August.

On the year, Kiner-Falefa features a .268 average with a 31.7% on-base rate. He only hosts an 88 wRC+, meaning he’s 12% worse than the average MLB player. However, he’s been fantastic as of late, so he’s deserving of a bit of positive attention. If we are going to criticize IKF when he’s struggling, it’s only fair we show him love when he’s helping the team on both sides of the ball.