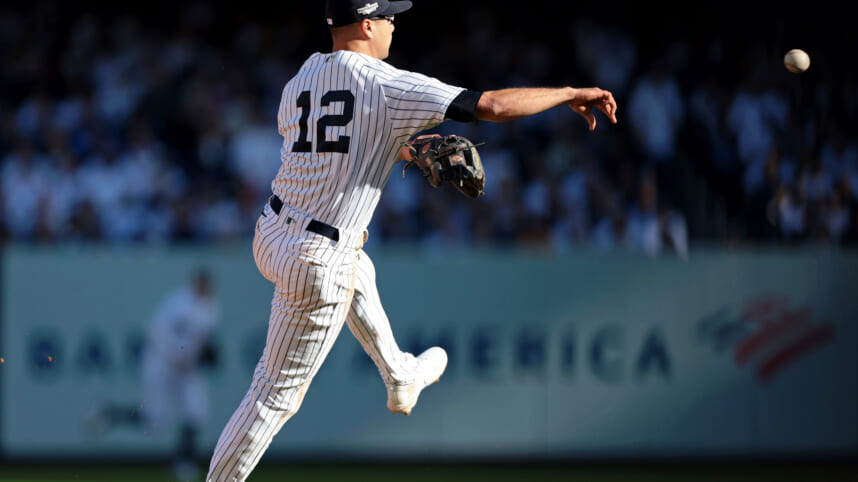 If the New York Yankees want to have a successful off-season, they need to be thinking about what positions should be overturned. Whether it be through youth, free agency, or even the trade market, general manager Brian Cashman has a myriad of different ways he can boost the team and their World Series aspirations for the 2023 season.

Of course, everything starts with retaining Aaron Judge, but the infield could go through a few changes within the next few weeks, notably at second base and shortstop. Despite Cashman stating his confidence in Josh Donaldson and Isiah Kiner-Falefa, there’s still a ripe possibility that he moves on from both players this off-season.

However, according to Joel Sherman of the New York Post, Cashman spoke at the GM meetings about trading Gleyber Torres and Kiner-Falefa.

Torres posted highs in hard-hit percentage and barrel rate, indicating he was making solid contact, despite the streaky nature of his contributions. With two years left of control, another team could see the value in Torres and attempt to trade for his services.

The young in-fielder has 31 games worth of postseason experience, so he’s versed in the expectations. Historically, Torres has been a great playoff batter as well, hitting .281 with a 36.4% on-base rate, five homers, and 17 RBIs. His numbers weren’t so good in the most recent postseason, but he played exceptionally well back in 2020 and 2019.

If the team feels as though Anthony Volpe and Oswald Peraza can take over starting jobs next season, Torres becomes expendable. I wouldn’t be surprised if they traded him for pitching support this off-season.

The Yankees could non-tender Isiah Kiner-Falefa and steer clear of his final year in arbitration. He’s projected to earn a bit more than $6 million for the 2023 season, which isn’t an egregious number by any means.

If the bombers want to move on from him, they should consider a trade rather than simply releasing him from the roster. They might be able to get a prospect in return or a struggling player with upside.

Considering Cashman consumed Josh Donaldson‘s monster contract just to acquire IKF, it seems as if the deal didn’t work out exactly how they planned. The Twins didn’t get much value either, receiving a struggling Gary Sanchez and a solid third baseman in Gio Urshela.

Nonetheless, it is clear that IKF can’t handle the pressure of playing shortstop in New York, so moving him over to third base may also be a risky play. At this point in time, it is difficult to imagine the Yankees moving forward with him as a starter, but given they floated his name in potential trade talks, that should tell us all we need to know.