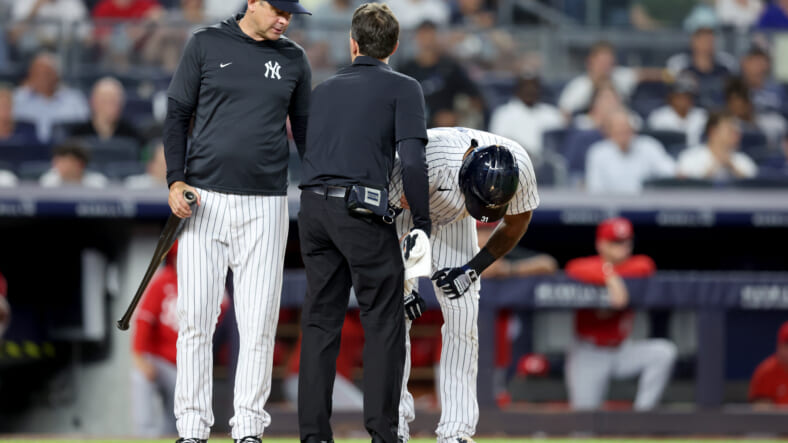 If New York Yankees general manager Brian Cashman was on the fence about acquring an outfielder at the trade deadline, he may have no choice but to do just that. During Tuesday night’s game against the Cincinnati Reds, Yankees outfielder Aaron Hicks fouled a ball off his right shin, forcing him to leave the game in extreme pain.

“Obviously it got him pretty good,” Boone said. “Hoping for the best there.”

However, the Yankees are going to need a supplement moving forward, whether that be Tim Locastro, more reps from Giancarlo Stanton, or even Matt Carpenter out in the field.

Hicks suffered a bone contusion in his right shin, which could keep them out anywhere between 4–8 weeks.

Considering how significant Hicks was limping when leaving the field, it looks like a serious injury that could take quite a while to recover from. Luckily, he has the All-Star break coming up to offer a bit of cushion in his timetable for return.

The Yankees may have to make a move at the deadline for an OF now:

The injury undoubtedly makes Kansas City Royals outfielder Andrew Benintendi that much more enticing. Benintendi is hitting .314 with a 38.4% on base rate and .399 slugging percentage.

The Royals want a solid prospect in return for Benintendi, who is only under contract for the rest of the 2022 season. He would undoubtedly smooth over the outfield and provide a fantastic contact hitter with underrated power.

In the meantime, we should expect to see a lot more of Carpenter in left field over the next few weeks. Carpenter has played 12 innings in left field for the Yankees this season but has been an offensive powerhouse. Over 77 plate appearances, Carpenter is hitting .344 with a 44.7% on-base rate, 10 homers, and 22 RBIs. The Yankees have been looking for opportunities to get him more involved in the batting order, and Hicks being out for several weeks gives them that flexibility.