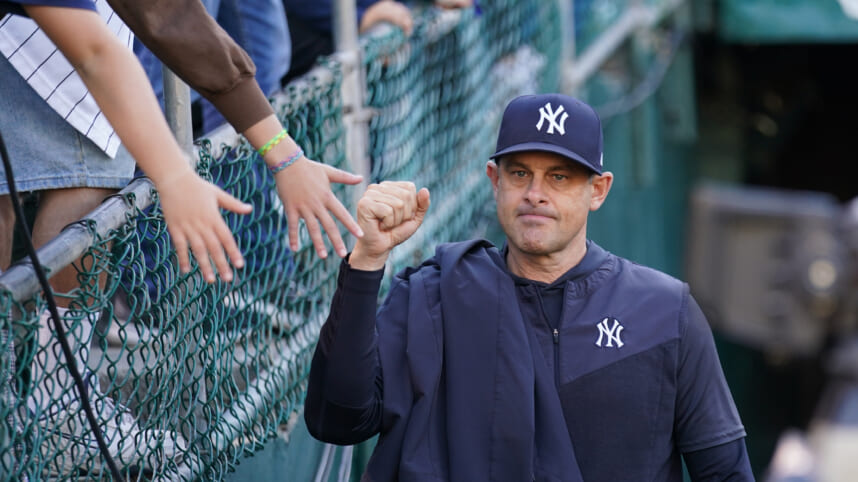 The New York Yankees have a few big decisions coming up over the next few days, notably a potential future contract for general manager Brian Cashman. After Cashman’s situation is cleared, their attention will then turn to slugger Aaron Judge, who has several suitors looking to bid for his services on the free agent market.

There was some speculation that the Yankees could consider moving on from manager Aaron Boone, but owner Hal Steinbrenner better shot those rumors down Wednesday afternoon, indicating that Boone will remain the manager of the Yankees moving forward.

“As far as Boone’s concerned, we just signed him and for all the same reasons I listed a year ago, I believe he is a very good manager,” Steinbrenner said Wednesday as he left the Yankees player development complex. “I don’t see a change there.”

Per MARK DIDTLER of the Associated Press

The Yankees likely aren’t going to shake up the front office:

If Steinbrenner is committed to Boone, we can only imagine Cashman will be retained as well. For a team that hasn’t won a World Series in over a decade, making the playoffs every year it’s not a bad consolation prize, but leaves a lot left to be desired.

Hal stated that he hasn’t spoken to Cashman much about extending his contract, but they have had some preliminary talks.

“We haven’t talked about anything yet,” Steinbrenner said. “Cash and I had some preliminary conversions.”

The Yankees’ future success relies heavily on how Cashman’s moves pan out moving forward. He was active at the deadline this past summer, acquiring Frankie Montas, Andrew Benintendi, Harrison Bader, Lou Trivino, and Scott Effross.

Effross is likely out for the entire 2023 season after sustaining an elbow injury that will require Tommy John surgery.

Given the fact that most of Cashman’s moves didn’t pan out, there is a legitimate argument to make that the Yankees should move on from his services, but it is unlikely, given he gets the team to the postseason every year.

The Bombers already locked down Boone to a new three-year contract through the 2024 season with a club option for 2025. Firing managers and taking on exorbitant amounts of salary isn’t a sustainable practice, which Steinbrenner obviously understands, giving his support on Wednesday.