Yankees: Gleyber Torresâ€™ defense is still a work in progress 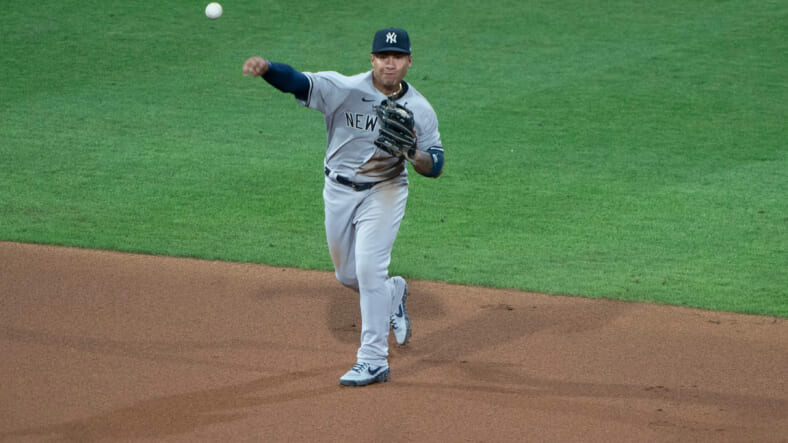 The 2021 MLB season is only a little over a week old. Itâ€™s way too early to make conclusions, let alone judge a playerâ€™s performance when baseball is a game in which sample sizes matter. However, we can start making a few observations based on the New York Yankeesâ€™ first two series against the Toronto Blue Jays and Baltimore Orioles.

One of those early observations is that Gleyber Torres, the Yankeesâ€™ starting shortstop, hasnâ€™t looked very smooth out there in the field. For years now, people have been doubting his ability to stay at shortstop for the long term, and 2021 is a big year for him. He can silence the critics. However, he needs to show more consistency and not complicate the routine plays.

The Yankees still believe in Torres and think he can develop into a passable shortstop, but itâ€™s fair to say his first week of the 2021 campaign hasnâ€™t gone as planned. He already has a couple of errors, and one of them was costly: a poor throw to first base in the 10th inning of Wednesdayâ€™s loss to the Orioles let a run score.

The Yankees still believe in him

If he had gotten the out, the Yankees would have gotten out of the inning unscathed, as there were two outs already. However, he double-clutched and bounced his throw to Jay Bruce, the first baseman, who was unable to hold on to the ball.

â€œHe has all the capabilities to be able to go out there and do it,â€ Yankees manager Aaron Boone told MLB.com. â€œYou have a high-profile miscue or something, youâ€™ve got to be able to work past that. And the good thing about Gleyber Torres is heâ€™s a great player. Heâ€™s working hard at his craft, and he has all the equipment to get through that and come out of this on the other side.â€

Torres has the drive to improve and worked tirelessly on his footwork with infield coach Carlos Mendoza during spring training.

â€œDuring Spring Training, I prepared really well,â€ Torres said on Tuesday. â€œI try to be focused on every play, every inning. I feel really good. I feel confident.â€

Letâ€™s see if Torres can improve over time.