Yankees gearing up for competition at shortstop in 2023 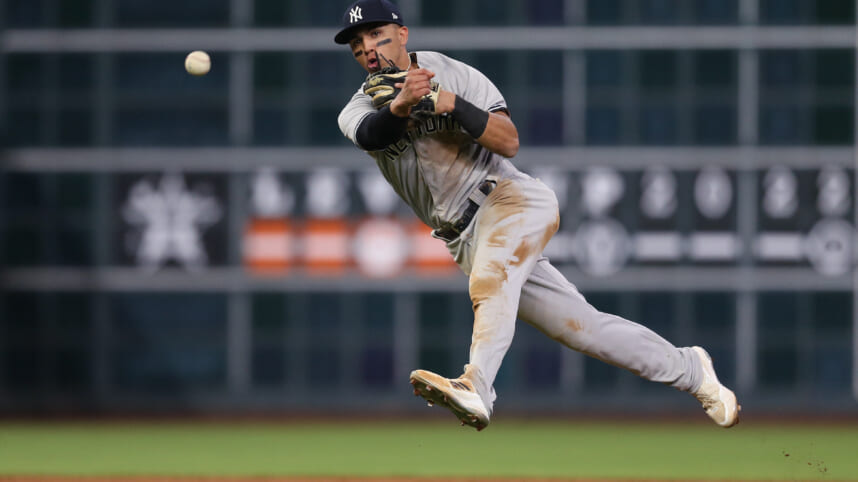 The New York Yankees may be scouring the free agent market for a potential big-name shortstop, but the more realistic scenario is a competition between Oswald Peraza and Anthony Volpe in 2023.

Peraza earned a few opportunities at the end of the 2022 season, playing in 18 games, featuring in 89 innings at shortstop, recording a perfect fielding percentage with four double plays turned.

Offensively, Peraza showcased his talent, hitting .306 with a 40.4% on-base rate, one homer, and two RBIs over 57 plate appearances. He recorded a 15.8% strikeout rate and 10.5% walk rate, displaying veteran-level patience at the plate. However, those numbers are unsustainable, so we should expect to see him revert back to his Triple-A numbers at the beginning of next season.

Just because Pereza may take a step back offensively doesn’t mean he can’t be an incredibly productive player as he gains more experience. In fact, I would argue that he will get better over time, like fine wine.

The Yankees are banking on Anthony Volpe:

Volpe, on the other hand, is only 21 years old and looking to make the jump to Major League Baseball next season. He featured with both Double-A Somerset and Triple-A Scranton this past year, hitting a combined .249, 34.2% on-base rate, 21 homers, and 65 RBIs with 50 stolen bases. Volpe is a phenomenal young offensive threat with encouraging defensive qualities, which suggests a position battle at shortstop between the two youngsters.

In fact, general manager Brian Cashman indicated that prospects are capable of pushing their way into the starting team well ahead of their expected timeframe. He referenced Robinson Canó and Alfonso Soriano as two examples of that, so expecting Volpe not to play a big role next year might be ill-advised.

Per Brian Cashman regarding Peraza and Volpe.

The best part about a position battle is that whoever loses ultimately ends up at second base. The Yankees are expected to entertain potential trades surrounding Gleyber Torres after floating him at the trade deadline this past summer. If they move on from Torres, Volpe, or Peraza can easily fill in at 2B, a position they both have some experience playing.

There’s always the possibility that Volpe simply isn’t ready to start immediately next season, which would force DJ LeMahieu into a prominent role, which is already anticipated. DJ could start at 2B or on the hot corner until Volpe is ready to make the transition, but that would leave one infield spot open for the taking, which could ultimately end up in Isiah Kiner-Falefa’s hands if he’s not non-tendered.

The Bombers’ infield certainly expects to change this off-season, but it seems like their reliance on youth may open up a bit more cash flow to take a swing at bigger free agents. Obviously, extending Aaron Judge is the main priority at this point in time.