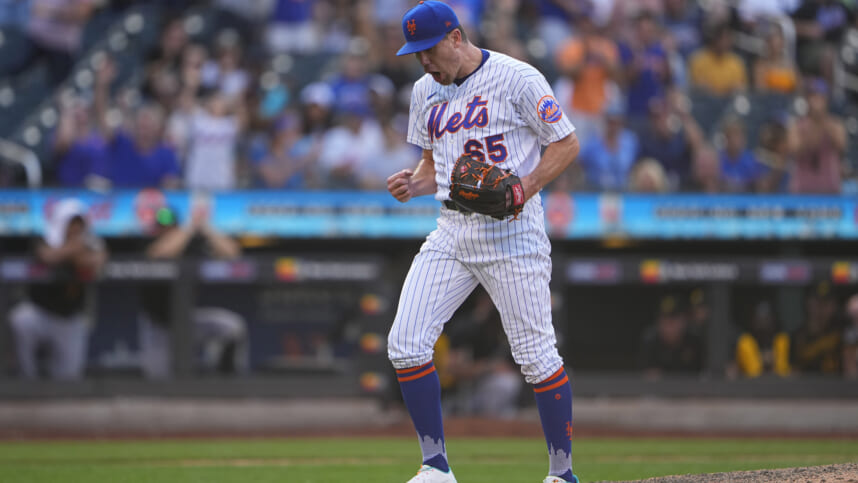 The Yankees have a strong bullpen, but every year they try to improve their bullpen and bolster a strength. You never know when you’ll have a back-breaking injury, when a player will regress randomly, or when you just need to have that extra arm on hand.

They’ve been able to look internally, on the trade market, and in some under-the-radar signings to get key contributions, and that won’t change anytime soon. I don’t believe the Yankees should be making any huge financial commitments on the reliever market financially or in prospect capital, but they should look to get surplus value from low-cost signings.

Trevor May had a tumultuous tenure with the New York Mets, posting a 3.07 ERA and 32.6% K% in his first 44 innings with the Mets, but put up an ERA of 4.95 over his final 43.2 IP in Queens. The concerns about whether it was related to the substance ban, injury, or just natural regression are valid, but looking into the numbers deeper can allow us to get a more accurate description of whether Trevor May still has the potential to get back to what he was before, and whether the Yankees should buy-low on him or not.

Signs of Life After Returning From Injury:

May wasn’t doing this in garbage time either, with a 0.23 WPA in that sample, and he became a massive part of the Mets’ bullpen. May was also able to provide 2.1 innings of scoreless ball, striking out 4 of the 7 hitters he faced, however, the Mets didn’t advance to the NLDS in spite of his strong efforts. There were tangible signs of progress in the production, but was it just a blip, or was there anything to point to as the “cause”?

Stuff+ is a metric I’ve cited a myriad of times in my articles, and for good reason. Stuff+ not only covers all the properties of a pitch, but it also stabilizes quickly, thus making it viable for small samples. When we look at where Trevor May’s Stuff+ was at before the IL stint and at the end of the season, we can easily identify what caused that great stretch to close the season.

That is a near 8-point increase in Stuff+, which tells us Trevor May’s health could have been the variable that caused the horrific start to the season. Trevor May’s slider also experienced an uptick in velocity, as in his final 10 outings, his slider averaged 86.9 MPH when it had averaged under 84 MPH before that. Here are his splits in those outings:

This new slider was highly effective, generating a .000 wOBA in that timespan and being a pitch May could rely on to get whiffs. That being said, his slider wasn’t his go-to pitch for strikeouts, nor was it his best. That would go to May’s revamped changeup, a pitch that would make him a nightmare for lefties to face.

Trevor May went into 2022 with a splitter, a pitch he had began using after his changeup allowed a SLG% over .600 in 2021. When discussing the new split-change he was throwing to start the year, Trevor May mentioned how little time he had to refine the pitch, going on to say, “I wish I had more than three weeks to figure that out, but got to do the best with what you’re given,” an interesting quote considering the context of the 2022 offseason. The lockout kept players and coaches separated for the entire winter, and thus changing pitches came with the added risk of not being something you can work through with your organization’s pitching coaches and developmental staff.

While rehabbing, it seems Trevor May opted to tweak his changeup even more, and this could be because of the putrid results his fastball had up to that point. Batters had a .506 wOBA against on his four-seam fastball with just an 8.3% K%, a massive red-flag for a primary fastball pitcher. Why does a fastball matter in regards to a changeup’s profile? An individual pitch needs to not just perform well but also work well off of the rest of a pitcher’s pitch mix. May decided a depth-heavy offspeed pitch like his split-change just wasn’t doing the job, thus, he began using a changeup that’s unique to anything he’s thrown in the past.

The new changeup emphasizes generating more run and drop than the 2021 pitch, and perhaps it’s that familiar grip and added confidence to throw it over the plate that allowed May to have more success with the pitch than expected. With a -2.4 Run Value per 100 pitches and 45.2% Whiff%, Trevor May began to attack batters with the changeup instead of using it as a chase pitch.

Trevor May threw his changeup over the plate and dared batters to hit it, and they hit .083 with a 79.6 Exit Velocity against. It was a devastating pitch, but what seems to make it work is just how well it disguises itself with May’s fastball. Batters are trying to cheat and get out in front on the fastball, and as they read fastball out of the hand, they’re swinging early or rolling over.

This new changeup and aggressive usage of it generated great results, particularly against lefties, as they blistered him to start the 2022 campaign but looked feeble after he began using his changeup.

The stark contrasts in results are also tied to improved results with the fastball, which could be because the changeup might fit his four-seam profile better than the splitter did, but that improvement in results could just be anecdotal evidence:

Still not a pitch that had much success this season, but you can live with it because it’s a high strikeout pitch and fastballs run higher wOBAs against typically than the other notable pitch groups. The changeup revolutionized Trevor May’s ability to handle left-handed batters, and it’s ultimately the pitch that has me the most excited for Trevor May in 2023.

What Role Can Trevor May Play for the Yankees?

The Yankees have two primary options against left-handed bats in Wandy Peralta and Ron Marinaccio, and Trevor May provides another weapon for lefties. He’s different from Peralta and Marinaccio, and that means a different look for LHB late in games. May has experience in high-leverage situations as well, with experience getting saves sprinkled in his set-up role work. The Yankees could get a versatile reliever who gives them plenty of lanes to use him in, and with his arsenal being refined, May is a weapon to handle whatever type of hitter he faces. His power stuff fits the Yankee mold, and with the shift going way, there’s going to be an added emphasis on generating strikeouts and not giving up contact.

To put it simply, Trevor May profiles as the prototypical power pitcher who generates a ton of swings and misses, but he’s added some finesse to his game, and it’s allowed him to take a leap as a reliever for an organization willing to buy-low on him. His market isn’t going to be weak, but after signing for $7.75 million a year after his elite 2020 season, I imagine the price for his services will be lower than that. If the Yankees can get him on a two-year $10 million deal with the second year as an opt-out for Trevor May, I think they’ll be able to get May to stay in New York, but this time for the Bronx Bombers. The upside here is that Trevor May is able to give the Yankees the top 20 reliever production he gave the Twins before going to Queens, and the stuff is still there to do so.