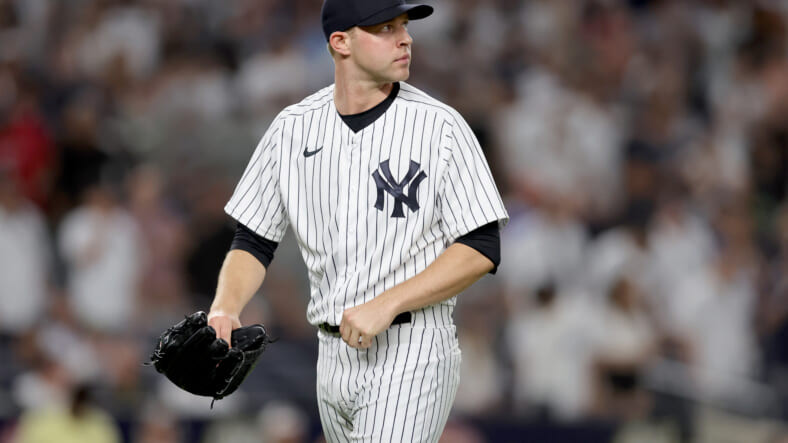 Even before Soto was a reported target, the Yankees needed more pitching support, notably in the starting rotation. A phenomenal one-two punch at the end of games with King and Clay Holmes had been helping significantly, but the Yankees have found themselves at a crossroad just a few days before the trade deadline.

The Yankees have big decisions to make:

Losing King is a significant blow to not just the bullpen but the entire team. King features a 2.29 ERA over 51 innings, striking out 11.65 per nine with a 76.9% left on base rate and 47% ground ball rate.

“He’s been one of the best pitchers in the league,” Boone told reporters. “I hope and pray the best for King.”

There was a somber atmosphere in the clubhouse following the win as the Yankee players awaited news on King and his elbow.

“He’s a hard worker. I know he’ll get back here and get back to the same spot he was in,” Taillon told reporters. “It’s never easy seeing a guy walk off the field. You think about his girlfriend and family watching. That’s not easy for anyone.”

King will miss the rest of the season and look to 2023 as a return timetable. However, he leaves a massive hole behind in the bullpen. The team is in a tough spot with Luis Severino, Miguel Castro, and Ron Marinaccio all fighting back injuries.

General manager Brian Cashman now needs to acquire a starting pitcher, bullpen piece, and a solid outfielder if he can manage at the deadline. He may have to forget about the outfield altogether and hope Joey Gallo revives the rest of the season. In July, Gallo is hitting .162 with a 35.4% on base rate. While he’s getting on base at a far more efficient level, he’s still failing miserably to hit the baseball, despite smashing two homers in his last three games.

There are a few options on the market that can help supplement the loss of King, but none have 98 mph sinkers that move like a frisbee. This is one of the worst things that could’ve happened to the Yankees right after the All-Star break. We can essentially guarantee that Cashman will be extremely active at the deadline in a few days following this devastating news.