Yankees face an interesting situation at the catcher position in 2023 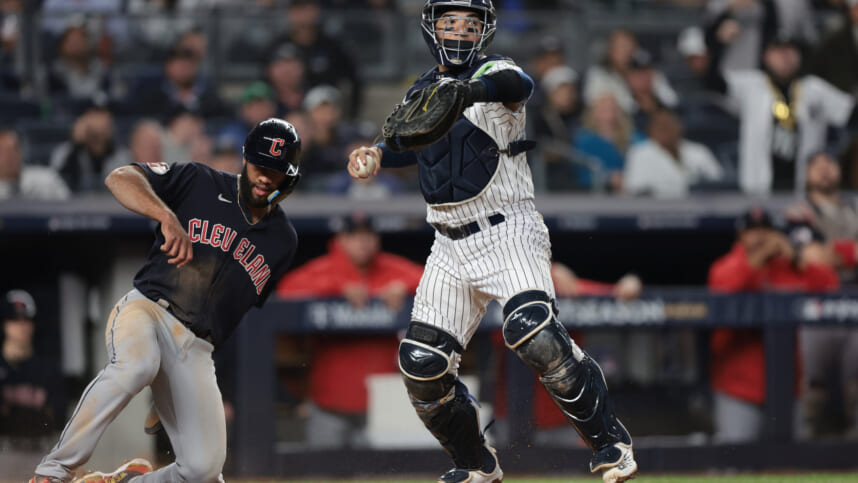 There’s no doubting the importance of the Catcher position in the lineup, and this season the Yankees realized that better than they had in recent years. While Jose Trevino fizzled off offensively, his defense was leagues above everyone else in baseball. The Yankees also were able to get production out of Kyle Higashioka, though his bat only came around the last two months.

With the season’s demise still fresh, I figured it would be best to begin looking ahead rather than relishing in the pain. What the Yankees choose to do at catcher will be an interesting thing to follow, but one guarantee is that Jose Trevino will be on the 26-man roster. Further than that, it remains unknown, and of course, Aaron Judge’s looming future with the organization takes precedence. Fortunately for the Yankees, Trevino is under team control until 2026, so for the immediate future, he should have a spot on the roster.

Trevi’s Miraculous 2022 Season for the Yankees:

When Cashman and co. completed the trade to acquire Jose Trevino from the Rangers prior to this season, many people saw the move coming but didn’t think anything of it. Following the absurd Spring Training that Higashioka had (which, as we saw, didn’t mean anything). This move was seen as grabbing a fantastic defensive backup catcher & offloading Albert Abreu (who was out of options). Additionally, the Yankees weren’t prepared for Rortvedt to miss practically the entire season, whom they acquired as part of the JD & IKF deal.

Jose was a revelation this year, absolutely lapping the field of catchers in every defensive metric and providing some key offensive moments throughout the season. Sadly, his bat fell off completely for the postseason push, but to be fair to him, the majority of players did. I believe that the most important facet of a catcher’s value to the team is his defense, specifically keeping the wild pitches in front of him and stealing strikes from batters. Jose excelled at both those things. His defense saved games, ended high-leverage innings, and won the team ball games. Below are his 2022 defensive statistics, where he ranked amongst all catchers, as well as the closest next guy:

Trevino is a lock for the roster come Opening Day 2023 (I know, so far away), but beyond that, nothing is certain. I do not think the Yankees will bring back Higgy, despite his late-season run, as I think assuming Rortvedt is healthy, he’ll get the opportunity. Nevertheless, rumors about the team’s interest in certain catchers will fly around. Some believe that Trevino is more suited to a platoon role (153 wRC+ vs Lefties vs a 74 wRC+ vs Righties), which could lead to Rortvedt — who is a better hitter vs righty pitchers, to get some ABs.

The Potential on the Market:

There’s definitely some truth to the matter on having an offensive catcher or one that can at least swing the stick at an above-average level. The Yankees are always going to be “players” in the market, doing their due diligence and seeing what options are available. There are a few names that immediately stick out on the surface level, and assuming the team wants to upgrade the catcher position (not a necessity, more a commodity), then these are the guys I can see them looking into.

Remember, not every one of these guys will even be traded to nor inquired about by the Yanks, but if I were in the FO, I could see these guys garnering some attention.

The Oakland Athletics are absolutely not competing, nor will they be anytime soon. The floodgates opened last offseason when the team shipped off Manaea, Olson, Chapman, and some other guys, and then once more during the deadline — when the Yankees traded for Frankie Montas and Lou Trivino. Now, many people will immediately shut this idea down because they believe that any trade with Oakland has come back to haunt the Yanks. This would not be the case, Murphy is an established T5/T7 catcher in the league, and his offense is well above the league benchmark.

Murphy slashed .250 / .332 / .426 with a 122 wRC+ and improved both his BB% and K% from the year prior. Additionally, he found himself in the T5 for every major defensive catching category, and the pop in his bat is no joke. While the Yanks certainly wouldn’t use him in the cleanup spot like the A’s have had to do, having him in the lineup would immediately bolster the bottom third of the batting order. Sadly, I do think he’ll cost a bit more than he would’ve last season — even if he lost a year of control, his bat improved tenfold, giving the A’s even more value to negotiate. Murphy is 28, will be a FA in 2026, and posted a remarkable 5.1 fWAR this year.

There’s no doubting that the Reds have truly given up on their fanbase and sadly trying to compete within the immediate future. There moves last year saw some eyebrow-raising, but also saw the organization finally commit toward an identity. For years, they were on the fringe of being competitive but would either sell off or buy in halfway. Now, they know they’re rebuilding, and their future could be bright should they do so accordingly.

Tyler Stephenson is one of the few remaining big-name pieces that the Reds have left at their disposal. Last season they saw Castellanos leave for Philly (now in the WS), dumped every major starter and offensive contributor they had for prospects and capital, and now find themselves in a full-blown “tear down.” Stephenson was an animal last year prior to getting injured, as in the 50 games he played, he was easily the best offensive catcher in the league. His defense has improved gradually over time, but being a contact-first and offensive-first catcher has gotten him to where he is. Last year he OPS’d .854 (bat .319), with a 1.5 fWAR and 134 wRC+. Stephenson would cost a bit of capital, as he is only 26, but knowing the Reds, I feel like the team could make something happen. He is a FA in 2027 and has a few games at 1B under his belt as well.

For the past few years, every trade deadline in recent memory, Yankees fans have wanted the team to pursue Contreras. Now, his defense is not good at all, but his bat is easily one of the best in the league for the Catcher position. Contreras has unreal pop, incredibly quick hands, and bat speed, and clubbed 22 HR over 487 PAs (4 more than Murphy but needed 125 less PAs). I put his name last because I don’t see the Yankees spending much money on a Catcher, but I wouldn’t be shocked if they did go in on Contreras. His 2022 year saw him OPS .815, with a near 10% BB%, en route to a 132 wRC+. Since 2016, he has never posted a sub-100 wRC+ season. He’s a born winner, was a key contributor to the 2016 Cubs team, and is former teammate with Anthony Rizzo. The reasons behind him fitting with the club make sense, I just don’t see the financial side of things lining up.

Nevertheless, adding Contreras would immediately improve this team’s lineup tenfold. While his defense isn’t great, that’s why having Trevino on the roster — and, say, letting him catch Cole and Sevy, would be a great way for Contreras to see occasional DH days as well. His bat is no joke, and he’s been established as a top-tier offensive catcher for some time now. He will be 31 this upcoming season and, as previously mentioned, is a Free Agent. Many believe the Cubs will make him a great offer and that he wants to stay in Chicago (hence why they held onto him at the deadline), but baseball is a wild game. As they say, money talks in every language.

The Yankees have a ton of different routes they can take this offseason, and it remains to be seen how Hal and co. decide to navigate this rather chaotic collapse and right the ship. Hopefully, they’ll put the right foot forward and be active this offseason, with various deals and moves taking place. There’s no way this 2022 team can be run back again next year, as a good amount of the moves made clearly were not it. Take away Bader’s incredible postseason, and the deadline looks like a colossal L — although Clayton Beeter was dominating.

Catcher may not be where the organization has their sights set, but there’s no denying the want to always improve across the board. Trevino is a fantastic catcher, and the team could easily run it back with him behind the dish. However, his lack of offensive dimension does leave a bit more to be desired, and that’s where some of these guys could very easily factor in. The Phillies have gotten massive boosts and moments out of JT Realmuto, and even though he hasn’t been heralded as an offensive catcher for some time now, Maldonado has been a key contributor for Houston this postseason — with or without Pujols’ 12-year-old bat.

I want the team to be actively engaged with numerous FA’s and players on the market. There will most certainly be a few organizations that decide pre-2023 that they will not be competing, and better to strike earlier than wait for the market to conform to the first few deals struck. Can’t wait for this offseason, let’s see what the Yanks are cookin’.