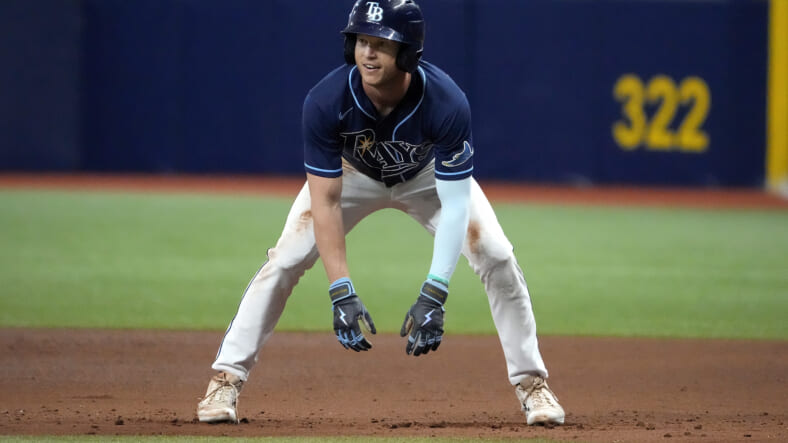 The New York Yankees are always looking for depth pieces, especially when they can steal one from the Tampa Bay Rays.

On Monday, Tampa Bay announced they had designated Brett Phillips for assignment. Phillips has featured in the outfield for Tampa Bay over the last 2.5 seasons, batting from the left side. He hit 13 homers last year with 44 RBIs and 14 stolen bases.

However, he’s been struggling considerably this season, even worse than Joey Gallo. He currently holds a .147 average with a 40.9% strikeout rate, 7.7% walk rate, five homers, and 14 RBIs. Defensively, he’s a fantastic outfielder that can play in both center and right field. Seemingly, if the Yankees move on from Gallo at the deadline on Tuesday, replacing him with Phillips could make sense.

Offensively, he’s nearly nonexistent, which is interesting considering the Yankees have shown interest in acquiring him alongside the Boston Red Sox and Philadelphia Phillies.

Source: The Yankees are among the teams who have inquired on OF Brett Phillips, whom the Rays DFA-ed today. Red Sox, Phillies in the mix, too.

What would Brett Phillips bring to the Yankees?

Looking at Phillips’s more advanced analytics, he has struggled against everything but off-speed pitches, hitting .250 against them. He’s hitting .136 with a .236 slugging percentage against fastballs with a 34.7% WHIFF rate. On breaking balls, Phillips might as well be sitting on the bench, hitting .095 with a 41.2% WHIFF rate over 42 at-bats.

By most accounts, Phillips might be might be one of the worst offensive players in baseball this season, especially with his hard-hit metrics deteriorating. He featured a 45.1% hard-hit rate last season, which has dropped to 29.8% this year. His barrel rate was 11.1%, falling to 3.8% in 2022 with an 88.6 mph exit velocity.

If the Yankees were to scoop up Phillips after being DFAd, he would likely serve as a backup if not sit on Triple-A until another team scooped him up.

After acquiring Andrew Benintendi at the deadline from the Kansas City Royals, the Yankees have plenty of starting outfielders to go around. They’re waiting for the return of Giancarlo Stanton, who has been dealing with Achilles tendinitis, but Aaron Judge and Aaron Hicks have held down their positions admirably.