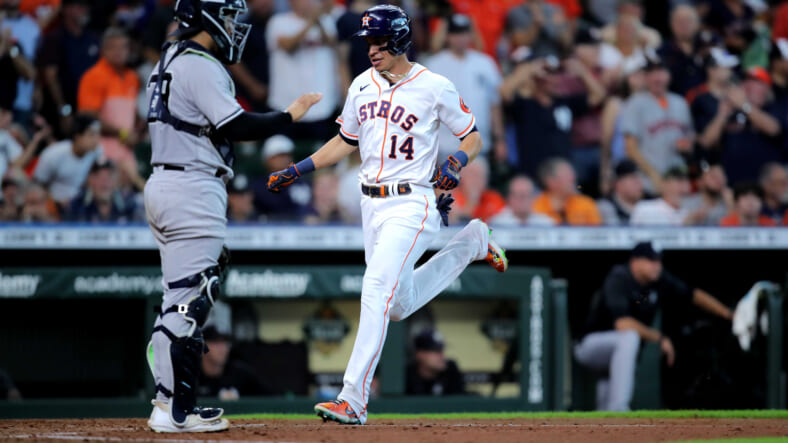 The New York Yankees faced off against the Houston Astros in Game 1 of a doubleheader on Thursday afternoon. Jordan Montgomery got the start for the Bombers in the first game following the All-Star break.

Montgomery lasted 6.1 innings, giving up seven hits and two earned runs. He struck out eight batters over 86 pitches before handing the ball over to Albert Abreu, who blanked Houston over 1.2 innings.

Montgomery has had a tough time getting run support this season, losing his previous game against the Boston Red Sox 5–4 in extra innings, allowing three runs over. Montgomery hosts a 3.26 ERA on the year, tied for 31st in Major League Baseball. He also hosts a 1.04 whip, good for 16th. However, the Yankees’ offense has really struggled against Houston this year to get runs across the board, tallying just two in the loss. Michael King loaded the bases but J.J. Matijevic came in clutch to force Isiah Kiner-Falefa to make a tough play.

Overall, the team recorded five hits, allowing opposing starter Cristian Javier to once again have a dominant performance. Javier gave up two hits and one run over 5.0 innings of action. He’s given up just one run in his past 12 innings against the Yankees.

The Yankees have a chance to hit back:

With the defeat, the Yankees lost a game in the overall standings, with Houston drawing closer, sitting just 3.5 games back. The Bombers do have an opportunity to correct their loss in the afternoon, with the second game of the doubleheader coming up at 6:40 PM.

The Yankees called on Domingo German to start his first of the season after enjoying five rehabilitation games with the team’s minor-league affiliates.

In German’s last performance with Triple-A, he lasted 4.0 innings, giving up one hit and zero runs. The Yankees were expected to start Jameson Taillon in Game 2 but wanted to give him an extra day of rest. German will start the game, but the team called on JP Sears to feature as the 27th man for the doubleheader, meaning he could platoon German depending on how many innings he gets through.