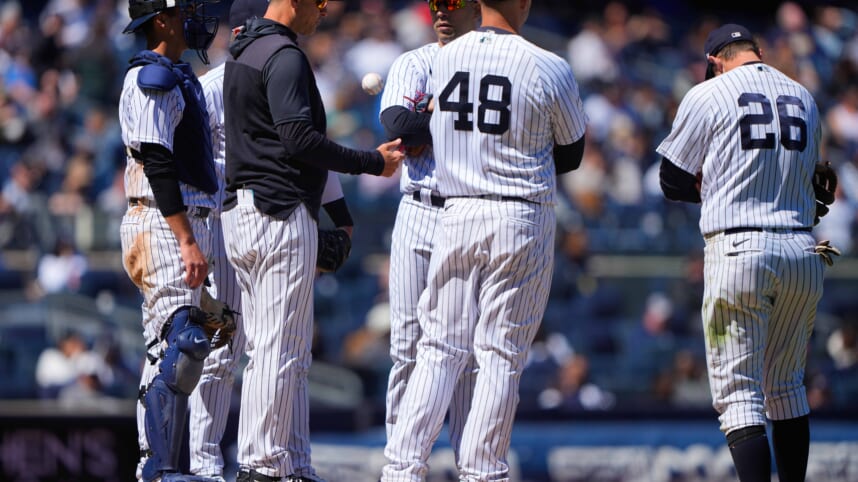 The New York Yankees have a knack for developing and finding elite bullpen talent, considering they have gotten a ton of value out of Michael King and Ron Marinaccio this year.

Marinaccio is in his rookie season, hosting a 1.85 ERA over 34 innings. However, the Bombers might’ve stumbled upon another quality relief pitcher in Greg Weissert.

What Greg Weissert is bringing to the Yankees:

The Yankees called upon Weissert to help smooth over some bullpen deficiencies against the Oakland Athletics last Thursday.

In his first major league action, Weissert was completely destroyed, giving up three earned runs and two walks, recording just one out. For some, a debut like this may deteriorate confidence beyond repair, but Weissert bounced back with two stellar performances.

“That first outing was rough,” Boone said. “It was not good, and it’s easy to have it snowball on you up here.”

The 27-year-old pither gained some key advice from an unexpected teammate, Ryan Weber, who’s been in and out of the Yankees bullpen this season.

“Ryan Weber gave me some advice,” said Weissert. “He’s a pretty good friend of mine now. We were texting a little bit and he gave me some pointers on just settling in and getting those nerves outs. There was a lot of anticipation and a lot of build up into that debut after all the time you have in the minors. So it definitely sped up a little bit, but I was able to step back and take a look at it objectively and I went to the next one with a different mindset.”

After learning how to manage his nerves on the mound, Weissert returned back with four innings of hitless play, striking out five combined batters over two games against Oakland and the Los Angeles Angels.

“It’s really good to see,” Boone said. “And giving us two innings after (pitching two innings) two days ago, it’s not exactly how I want to do it, but he was so efficient.”

After starting pitcher Jameson Taillon was knocked out of the game after being hit by a line drive, the Yankees called on Weissert to help carry them a few innings. He did just that, tossing 21 pitches, including 16 strikes.

Greg utilizes a slider, singer, 4-seam fastball, and change-up. He gets unbelievable movements on all four of those pitches, specifically his slider and sinker.

While it is unlikely he serves any purpose during the playoffs, the Yankees can look ahead to the 2023 season as the first full year Weissert can make an impact.