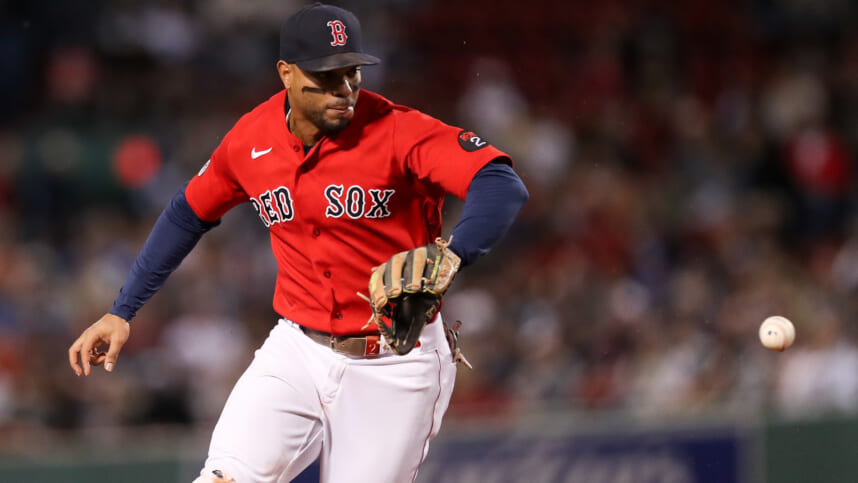 The New York Yankees have big plans for the shortstop position, notably elevating Oswald Peraza and Anthony Volpe to compete in a position battle.

However, it is a big risk depending on young talent without any established experience. If Peraza struggles and Volpe simply isn’t ready to make the transition to the MLB, the Yankees may have to suffer through a season of inadequate play at shortstop.

At the very least, Peraza projects as an elite defensive player, but his offensive qualities are certainly a big question, despite finishing the 2022 season on a high note. The 22-year-old infielder hit .306 with a 40.4% on-base rate over 18 games, a small sample size that doesn’t give us enough proof to coin him the absolute starter.

If general manager Brian Cashman wants to solve the position once and for all, targeting Xander Bogaerts from the Boston Red Sox could be a good move. At 30 years old, Bogaerts projects to land an eight-year, $225 million deal, averaging out at $28 million per season.

Bogaerts is coming off a tremendous 2022 campaign, hitting .307 with a 37.7% on-base rate, 15 homers, and 73 RBIs. He’s a double-digit home run hitter every season and features above-average defense at shortstop, hosting a .983 fielding percentage over 1249.2 innings this past season. In addition, Bogaerts featured 4 defensive runs saved above average with 5 outs above average, which would provide the Yankees with a lockdown defenseman at a key spot.

The Yankees need to upgrade shortstop and Xander Bogaerts does just that:

Considering the players Cashman has utilized at shortstop in the past, solving it with a big-name free agent could be exactly what the team needs. That doesn’t eliminate Peraza or Volpe from the conversation, but rather shifting their positions around.

Peraza has the talent to play third base and Volpe could slide in at second, maximizing their offensive qualities while retaining their defensive production.

The question is, would Cashman be willing to spend on those Aaron Judge and a player like Bogaerts, which is unlikely? However, Judge is currently touring the West Coast for a big contract and could easily walk in free agency, opening up a plethora of options for the Yankees to consider. Bogaerts along with Trea Turner are obvious alternatives, leaving the team with solid backup plans in case they face a problematic scenario with Judge walking.