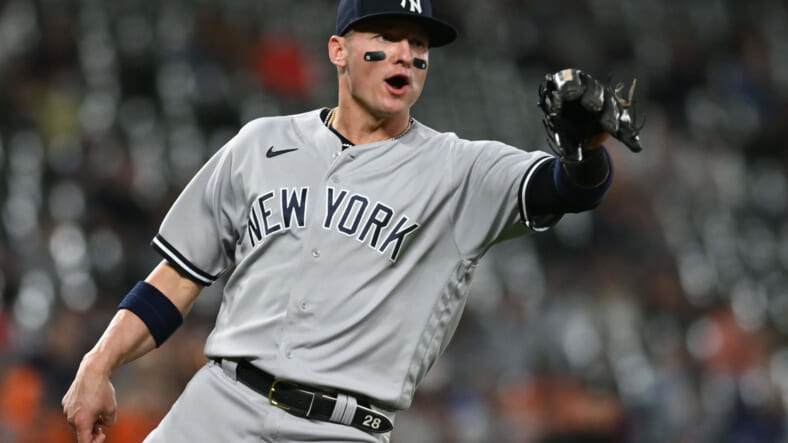 The Yankees have a lot of work ahead trying to clear some payroll and open up the funding to retain superstar slugger Aaron Judge. The Bombers have a projected total payroll of $182.3 million, according to Spotrac. Last season, they sat at $264.9 million after arbitration, so the projected number will increase substantially over the next few months.

However, the team has a few bloated contracts on the roster that could be offloaded to save additional payroll space, helping to keep them in a specific luxury tax threshold. The Yankees continue to pay Gerrit Cole at a $36 million per season rate and Giancarlo Stanton at $32 million per year. Josh Donaldson is currently taking up 15.56% of the team’s payroll and Aaron Hicks 7.99% — it is quite obvious that their departure would help the team at the end of the day.

Three players the Yankees can offload to save $38 million:

Donaldson, 36, is set to earn $21 million next season, an egregious number that can’t be retained. Coming off a year where he hit .222 with a 30.8% on-base rate, including 15 homers and 62 RBIs, his value continues to plummet.

While his numbers looked far better in 2021, he’s nowhere near worth the $21 million price tag. However, general manager Brian Cashman stated that Donaldson would remain the team’s starting third baseman in 2023, but that could’ve been a smoke screen.

Offloading Donaldson is easier said than done, though, since he will likely have to package him with a solid prospect just to get him off the roster. Otherwise, they could agree to trade him to another team, picking up a portion of his current contract and saving a bit of cash in the process.

The Yankees have a tough decision to make with Isiah Kiner-Falefa, who they acquired from the Minnesota Twins in exchange for Gio Urshela and Gary Sanchez. Management was extremely high on IKF, a 27-year-old infielder who hit .261 with a 31.4% on-base rate this past season. He hit four homers with 48 RBIs, recording a career-high 22 stolen bases.

The issue with IKF is that he creates extremely weak contact, which isn’t exactly what the Yankees need. Contact is only good when you’re able to get on base at an efficient clip, which isn’t the case with IKF. In addition, he botched too many routine ground balls to trust him at shortstop moving forward, so they could non-tender him and save the projected $6.5 million he will earn in arbitration next year.

Saving $6.5 million on IKF is a realistic option, but management may see the value in retaining him, even if it means he serves as a utility piece or plugs third base if they manage to offload Donaldson.

Hicks hasn’t had an above-average season since 2020, but that was the Covid abbreviated campaign he only featured in 54 games. He hit 27 homers back in 2018, but after breaking his wrist in 2021, he simply was never able to recover his former power.

At this point in time, the Yankees’ best move is to offload Hicks and try to recoup as much money as possible in the process, especially with the emergence of Oswaldo Cabrera.