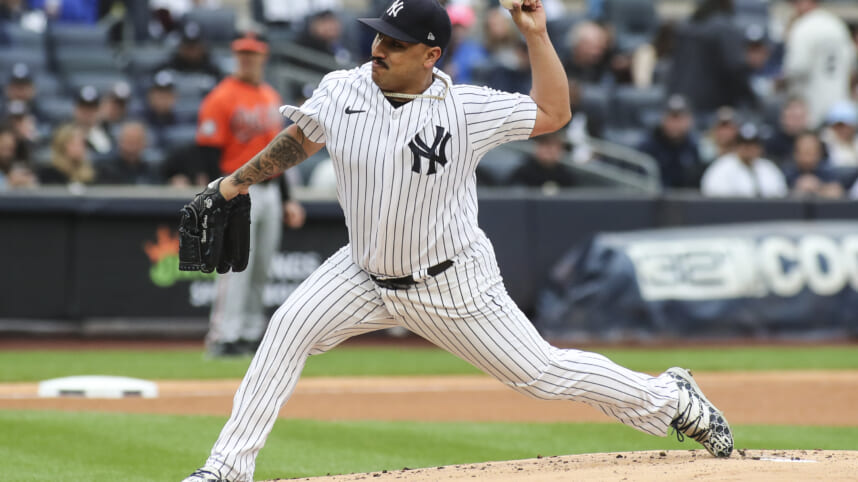 The New York Yankees still have full three games left in the regular season before the Wild Card commences, and they wait patiently for the ALDS to come around.

In the meantime, they can continue ramping up against a lowly Texas Rangers squad. Starting pitcher Luis Severino took full advantage on Monday night, throwing seven hitless, striking out seven batters in the process. He desperately wanted to stay in the game, but manager Aaron Boone was looking toward the bigger picture, a healthy Severino in the playoffs.

However, the Bombers have another big decision to make regarding game one of the ALDS.

Who should be the New York Yankees’ ace?

Usually, Gerrit Cole would have that spot locked up, but Cortes has made a legitimate run at the position, especially having put together a few fantastic performances since returning from the injured list on September 8.

In September, Cortes earned a 1.80 ERA, giving up four earns runs over 20 innings. He hasn’t given up a homer in five consecutive starts, striking out 12 batters over 7.1 innings against the Baltimore Orioles this past Saturday. By most accounts, he’s looking like one of the best starters in baseball, making the decision even more difficult for Yankee management.

However, Cole indicated he is OK with whatever conclusion the Yankees end up with, tipping his cap to Cortes. Gerrit would usually be upset and frustrated by losing the opportunity, but there’s no questioning how excellent Nestor has looked the past few weeks.

“There’s certainly some merit to that,” Cole said Monday regarding Cortes’s dominance lately.

Ultimately, Cole is willing to do whatever it takes to help his team win, but that might start with limiting the number of home runs he gives up. In fact, Cole has given up home runs in seven consecutive games. In three of those games, he gave up two or more homers, and four earned runs apiece.

“I just want to win,” Cole said. “We haven’t talked about it, but I’m not assuming anything. I’m not here to be the ‘Game 1 guy’ and be worried about that. I’m just here to do my job. Whatever they ask me to do.”

Despite Boone recently stating that Cole should have the Game 1 spot locked up, the tides could be turning, given Cortes’s consistency. Even pitching coach Matt Blake indicated it could be either of those two that earns the start.

“It could be Nestor or Gerrit,” Blake said.

The 27-year-old journeyman isn’t known for his velocity but rather for his creative wind-up and incredible break. Nestor is bleeding confidence right now, and the Yankees must capitalize on that if they want to give themselves an advantage during the playoffs.