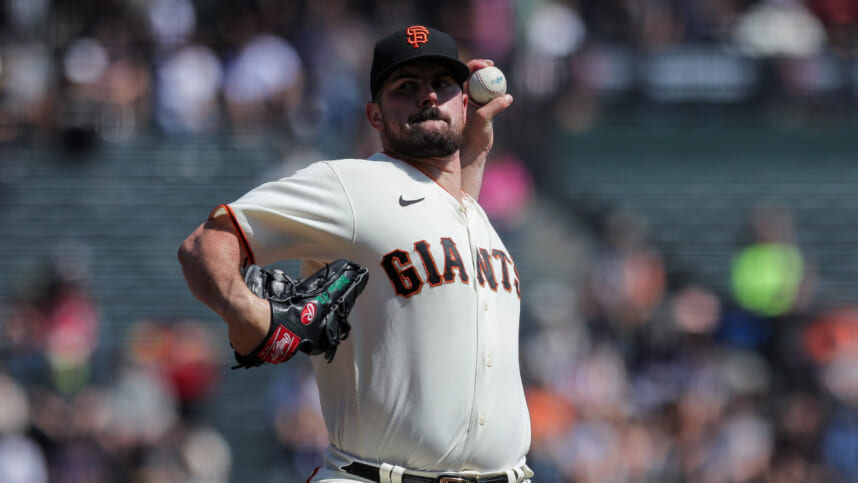 The New York Yankees aren’t losing too many pieces in their starting rotation, aside from Jameson Taillon, who served a decent role as a back-end option this past season.

The Yankees haven’t been connected much to Taillon regarding a possible contract extension, even after recording a 3.91 ERA over 177.1 innings. Taillon is a low strikeout pitcher, though, whereas the Yankees prefer a bit more velocity.

With that being said, the Yankees have a few options they could elevate into the No. 5 spot in the rotation, notably Domingo German and Clarke Schmidt. If they want to go in a different direction, they could look at one star free agent, Carlos Rodon.

Rodon opted out of the second year of his deal with the San Francisco Giants after earning a 2.88 ERA, 2.91 xFIP, and 11.98 strikeouts per 9 over 178 innings. Rodon is an elite-level pitcher at 29 years old, looking for a bigger contract and some well-deserved respect.

The Bombers had previously been connected to Justin Verlander, but he’s looking for a Max Scherzer type of deal worth upward of $40 million per season. Rodon won’t get anywhere near that, but he has a fantastic arm that would provide the Yanks with one of the best rotations in the game.

What would Carlos Rodon bring to the Yankees?

Rodon utilizes a 4-seam fastball and slider combination, which is unusual for a starter. Normally, a bullpen arm would be heavily reliant on just two primary pitches, but Rodon makes it work, given the unbelievable spin he produces.

His fastball yielded a .213 batting average this past season with a 27.9% whiff rate and 24.1% put-away rate. He struck out 135 over 399 at-bats, throwing it 61.2% of the time. That pitch specifically produced 8% more vertical movement than the average pitcher.

His slider, on the other hand, produced a .193 batting average with a 39% whiff rate and 24.2% put-away rate. He struck out 93 batters over 218 at-bats, throwing it 31.1% of the time. That specific pitch generates 54% more horizontal movement than the average pitcher, showcasing a sweeping movement that coach Matt Blake prefers.

The question is, do the Yankees have the flexibility to sign Aaron Judge on an extension and land one of the top starters on the market? Currently, the team has $201.6 million in projected total payroll after arbitration, leaving them with about $60 million to spend. Judge will take up a significant portion of that, and the team still needs a starting left-fielder who will likely cost upward of $10 million per season.

This ultimately boils down to how much money how Steinbrenner is willing to offload and if Brian Cashman can find a way to drop Josh Donaldson and Aaron Hicks in the process. There are many variables holding the Yankees back from being aggressive in the free agency market. They have a few pieces they’re trying to move, including Gleyber Torres, in which they could try and offload some bloated contracts in the process.

Having a rotation that includes Rodon would make them extremely difficult to overcome, specifically in the playoffs, which is what the front office should be thinking about right now.