Yankees could bring back one starting pitcher for the 2023 season 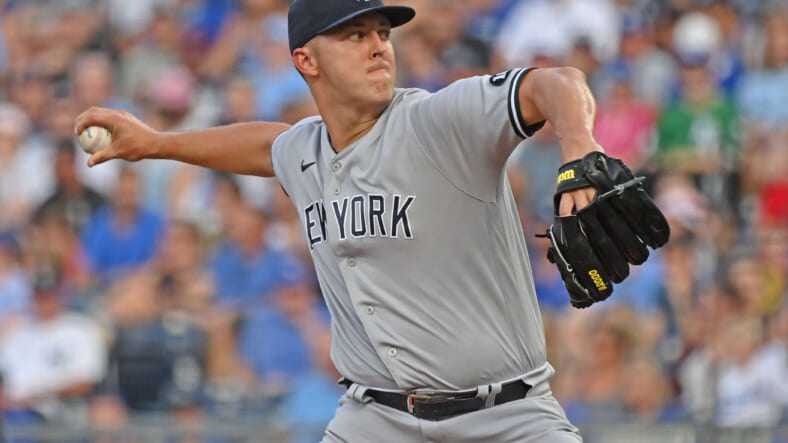 Luckily for the New York Yankees, their starting pitching rotation won’t undergo much change during the off-season. Looking over at the crosstown Mets, they have a few big decisions to make in their rotation, gearing up to lose Jacob deGrom, Carlos Carrasco, and Chris Bassitt. However, the Bombers will retain Gerrit Cole, Nestor Cortés, Luis Severino, Domingo German, and Frankie Montas.

The only player preparing to hit the open market is Jameson Taillon, who signed a one-year, $5.8 million deal in arbitration to stick with the Yankees for the 2022 season. At 30 years old, he’ll be looking for a new home, but the Yanks may consider retaining him, given he served a solid purpose as a number-five pitcher.

How did Jameson Taillon perform for the Yankees?

This was easily Taillon’s best season since 2018, when he recorded a 3.20 ERA. His velocity has fallen off a bit, but he otherwise got the job done, notably during the first half of the season. In April, he posted a 3.26 ERA and a 2.01 ERA in May before things took a turn for the worse. His September numbers recovered his ERA quite a bit, enjoying a 3.23 ERA over 30.2 innings to finish the season.

Looking at Taillon‘s pitch repertoire, he tends to rely on a 4-seam fastball, slider, curveball, cutter, sinker, and change-up sequence. His 4-seam, slider, and curveball are the only pitches he throws at more than 14%. However, new pitching coach Matt Blake changed up his usage quite a bit, seeing a massive decrease in his 4-seam fastball from 49.5% in 2021 to 35.7% this year. His fastball generated a .257 average, and his slider a .233 average. His primary strikeout pitch was his curveball at 22.8%, but he only threw that specific pitch 14.8% of the time.

Taillon is known to be a low strikeout high, weak contact starter. He produced a 41.4% ground ball rate this season with a 4.8% weak percentage, his best since 2017.

Given the Yankees don’t necessarily need Taillon and the fact he may get a pay increase after a solid 2022 season, they could easily let him walk. However, he’s a good clubhouse guy and is best friends with Gerrit Cole, so he may have some sway in that decision.

Nonetheless, Taillon serves a fine purpose as a back-end starter, but the Yankees might be able to find an equally productive picture at a lower price point.