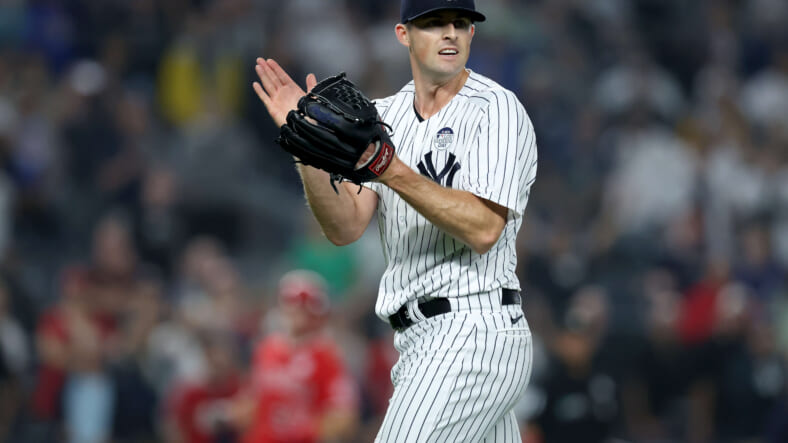 If the New York Yankees get a healthy and productive Clay Holmes during the playoffs, their chances of winning games increase exponentially. Holmes was arguably the best closer in baseball during the first half of the 2022 regular season, but his efficiency fell off quite a bit after the All-Star break.

He featured a 7.00 ERA in the month of July, giving up seven earned runs over 9.0 innings. He did also gave up a 6.75 ERA in August and a 3.55 ERA in September. Seemingly, he was feeling a bit more comfortable toward the end of the season but was shut down just prior to October with shoulder inflammation.

Holmes is expected to be activated for the ALDS roster, facing a few batters on Monday to test out his arm. Luckily, there were no issues regarding his quality and is tracking to be available at least during the middle portion of the series against the Cleveland Guardians.

“I definitely anticipate to be on the roster,” Holmes said at his locker on Sunday morning. “It’s just whether [I’m available to pitch in] Game 1 or Game 2. I think that just depends on kind of how we progress.”

Per Max Goodman of SI

The Yankees saw the best of Clay Holmes in 2022:

Holmes finished the regular season with a 2.54 ERA, 2.90 xFIP, 9.19 strikeouts per nine, and a 74.4% left on-base rate over 63.2 innings. Again, he was electrifying during the first half of the season, showcasing a dangerous slider/sinker combination. However, his pitch sequence changed as the months went on, likely by design. His sinker usage dropped to 68% in September compared to 90.2% in July, seeing an increase to about 32% with his slider.

Holmes’s best month of the year came in May, when he didn’t give up a single earned run over 14 innings. In May, he used his sinker 84% of the time and slider 16% of the time. His sinker generated a .114 batting average, giving up four hits over 35 at-bats. It also produced a 30.8% whiff rate and a 16.7% put-away rate. It logged 2209 RPMs, a bit higher than his average this season.

While the Yankees aren’t necessarily convinced he can produce at that level during the postseason, his presence is nonetheless valued. The Yankees will likely rely on Holmes or Wandy Peralta as their primary high-leverage arms once healthy, but it is great to hear that the 29-year-old bullpen arm is recovering nicely and should be 100% within the next few days.