Yankees close to getting back elite defensive outfielder Harrison Bader 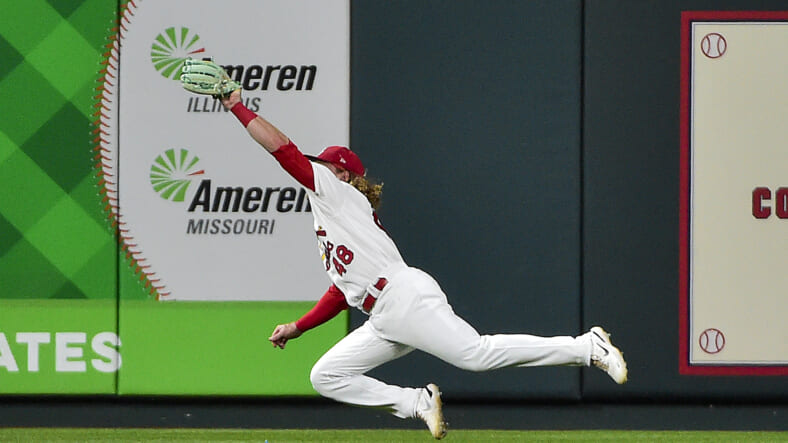 The New York Yankees just wrapped up a fantastic weekend series with the Rays, and that was with the numerous key injuries that the team has been plagued with. However, one guy appears to be making a hasty recovery as Harrison Bader begins to ramp up his workouts and stress on that foot. Bader continues to rehab with the Somerset Patriots in Double-A.

Bader was acquired at the deadline for Jordan Montgomery, and at this point in time, everyone believes the Yankees made a piece of poor decision-making. Yet, this could be one of the huge turning points in this late-season push, as Bader, when healthy, is one of the best defensive players in baseball.

His ability to track balls and make plays that look borderline impossible has contributed to him being heralded as the best defensive centerfielder in baseball. Even with the likes of Buxton, Pache, Kiermaier, Harrison Bader clears them all.

Bader may not be the biggest impact bat offensively, but he does have some pop and is able to swipe bags with the best of them. His wRC+ of 92 is slightly below average, but that could also be attributed to his injury and him not being 100% healthy.

In the shortened COVID 2020 season, he posted a 114 wRC+, and last year over 103 games and 401 PAs, he posted a 110. If Bader can be even slightly above average offensively, his defense will make him one of the most valuable players in the AL. The Yankees know what he is capable of, or Cashman and co wouldn’t have traded for him despite his plantar fasciitis.

This year, Bader has been walking at a career-low 4.7%, but he has also been striking out at a career-low 17.8%. He seems to be much more aggressive at this stage in his career, especially on the basepaths. Despite only playing in 72 games thus far, his 15 steals have tied his career-best mark that he set in 2018 (he played 66 more games that season).

Defensively, with Judge in RF, and Bader in CF, it’ll allow for the Yankees to toss out someone not as abled in LF. I could see the team electing to play Oswaldo Cabrera in LF a bit more going forward, especially given the fact that Hicks is not an MLB player, and if LIV Golf were offering pennies on the dollar for the contracts they hand out, Hicks could be that league’s first former MLB player to join.