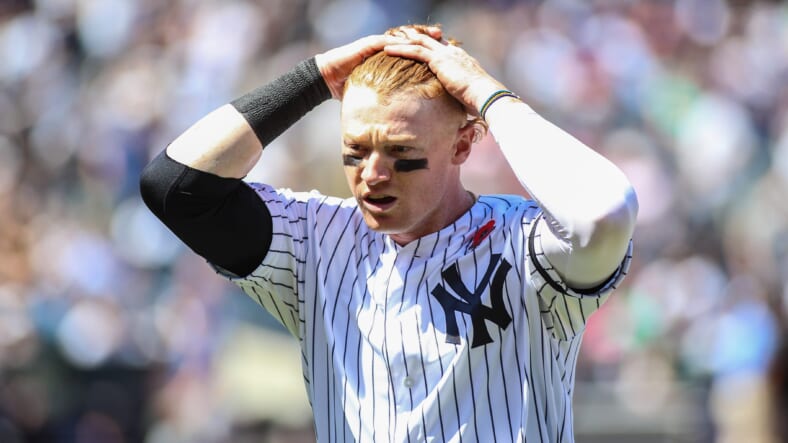 The New York Yankees came close to trading away outfielder Clint Frazier last offseason at the deadline, but he stayed put in their minor league system after creating a disturbance in the locker room due to defensive issues. The Yankees don’t tolerate negative emotions tarnishing their image or atmosphere, which is why Frazier was sent back down to AAA ball faster than he could swing his bat.

He commented back at his anger and frustration following an error-ridden night against the Boston Redsox in June:

â€œI donâ€™t regret [not speaking to the media]. To be fair, I donâ€™t think I owe anyone an explanation, because itâ€™s not a rule that I have to speak.â€

Frazier was having a nice season offensively, despite his defensive woes. His .267 batting average and 38 RBIs helped the Yankees survive a slew of injuries throughout the season, which ultimately helped them win their division and skip right to the ALDS with 103 total wins.

The New York Yankees need to find a use for Clint Frazier:

There’s no question Frazier holds value, but how much is the question. After grading above average in several categories offensively, his defensive skills saw his stock plummet. Multiple errors and dropped fly balls put him in the dog house rather quickly, and the Bombers could look to leverage him for pitching support this offseason.

After spending a few weeks in the minors, Frazier earned a second chance at life with the Yanks and manager, Aaron Boone. His return was abysmal, though, as he slashed .176/.243/.353 with just one homer and 11 strikeouts over 37 plate appearances. That spelled the end for Clint, and he was subsequently left off the postseason roster following his inconsistent season — defensively and emotionally.

However, with Cameron Maybin and Brett Gardner potentially moving, and Aaron Hicks recovering from Tommy John surgery, the Yankees could still use Frazier as a reserve option. If they elect not to trade him away, he has a serviceable bat and could provide value defensively if he works on his trade.

Having a 0.1 fWAR this past season, Frazier’s contribution towards the 2019 campaign wasn’t significant. The team didn’t rely on him for the most part, even during stretches of injury. That argument would indicate that Frazier could be on the trading block, but it all boils down to who the Yankees bring in as reserve options.