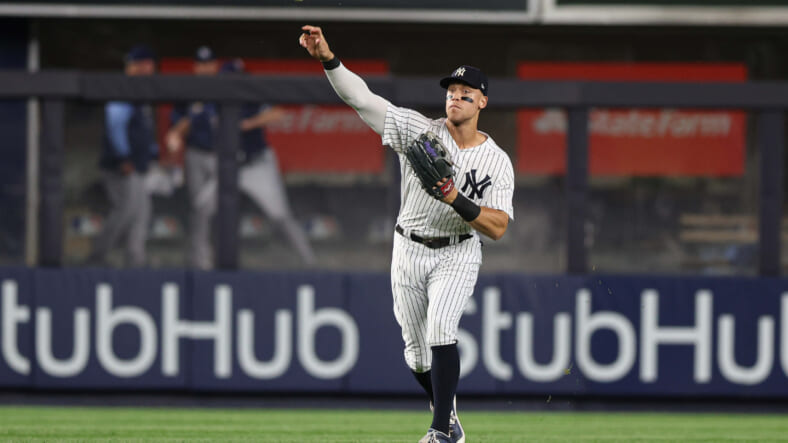 The New York Yankees trading for Andrew Benintendi from the Kansas City Royals should open up their options in the outfield. Considering the struggles of Joey Gallo, Benintendi should provide far more offensive production, getting on base at nearly a 40% clip and batting over .300.

However, the question going into Benintendi‘s first game was how manager Aaron Boone would structure the outfield. Benintendi is primarily a left fielder, playing the majority of his career at the position. This season, he’s spent 775 innings in LF, having only played 525 innings at centerfield in his entire career.

Aaron Judge is expected to move back to right field more frequently now that Andrew Benintendi is on the roster, said Aaron Boone, who has spoken to Judge about the plan.

Should the Yankees keep Aaron Judge in CF?

Judge has wanted to play center for a long time, finally getting the opportunity this season with his range and phenomenal arm. However, playing centerfield requires a lot more running and acrobatic plays, which increases the probability of injury to bigger athletes like Judge.

This season, the 6’7″, 282 pounds slugger has played 239.2 innings in right field and 444 in center. He has a perfect fielding percentage in both, but his value has skyrocketed playing center, making a number of fantastic catches.

The question is, would it be more beneficial for Hicks to play right field, where he’s played 681 total inning in his career over center?

Realistically, Hicks is a good enough defender to hold down centerfield without losing too much value. Sticking Judge in right field, the easiest outfield spot in Yankee Stadium, they can mitigate fatigue for the star player heading into the postseason. If anything were to happen to Judge, the Yankees would be in serious trouble, so taking every precaution is necessary.