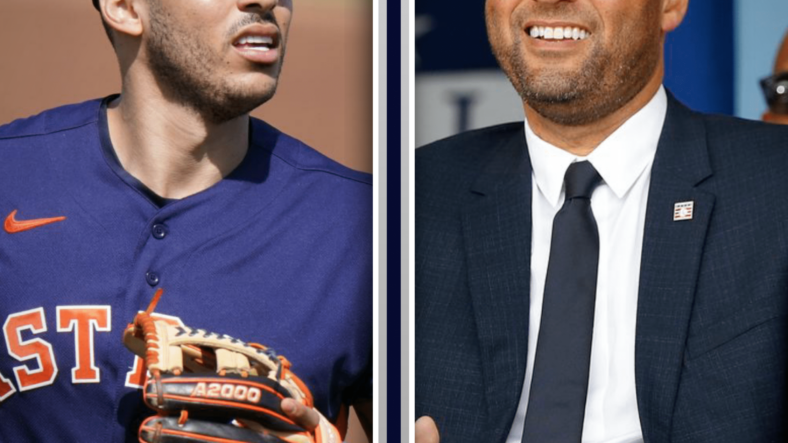 As if the Yankees needed another reason to hate Carlos Correa after that cheating scandal with the Houston Astros, he proceeded to say how â€œDerek Jeter didnâ€™t deserve any of the gold gloves he won.â€

Carlos Correa: "Derek Jeter didn't deserve any of the Golden Gloves he won".@RicardoGibbon

Correa is one of the top shortstops in baseball and is in line for a massive contract extension, which could possibly land with the Yankees and general manager Brian Cashman. Cashman isnâ€™t exactly the biggest fan of Jeter after years of turmoil, so Correa’s comments likely won’t impact his status within the organization. However, among the fans, heâ€™s quickly losing stock or whatever he had left of it.

Correa finished the most recent season with a .279 batting average, 26 homers, and 92 RBIs. His career-low 18.1% strikeout rate and 26.3 offensive WAR would be a welcome sight for Yankee fans, despite his comments about one of the team’s most prolific players in its history.

Some might ask how Yankee fans can still want Correa after what he said about Jeter? Ultimately it boils down to production. Jeter is a thing of the past, and while beloved by every fan, Correa could be the missing piece to a World Series appearance, which would erase any ill feelings toward the Astros star.

Of course, the team has plenty of options at shortstop this off-season, including Corey Seager, who would be a solid acquisition given his lefty bat and ability to translate to third base. Eventually, the Yankees want to elevate Anthony Volpe to take over SS full-time, and Seager can move to that hot corner, where they can maximize his skill set without any bad blood.

However, with a potential lockout impending, the Yankees might make a move sooner rather than later, prior to December 1. The expectation is that both Seager and Marcus Semien will sign before that date, but Correa could wait until after the lockout finishes to sign a monster deal.